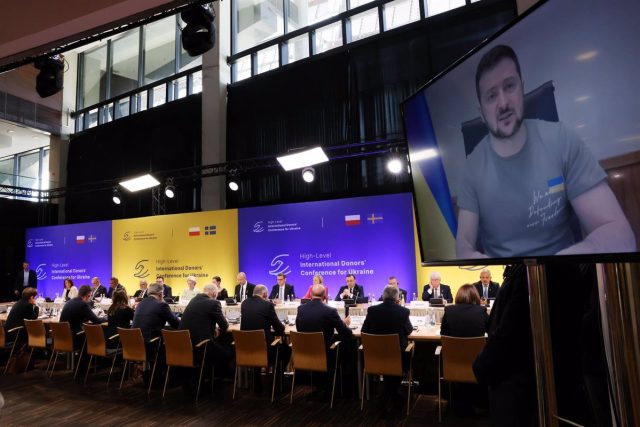 The International Donor Conference for Ukraine has served to raise some 6,500 million dollars (more than 6,100 million euros), announced this Thursday the Polish Prime Minister, Mateusz Morawiecki, host of a forum in which he has also participated telematically Ukrainian President Volodymyr Zelensky.

In April, a first meeting served to raise $9.9 billion for refugees. The international community has met again to relaunch assistance to a country that, according to Morawiecki, needs 12 tons of humanitarian aid every day.

“Your presence here shows that we are not indifferent to the suffering caused by this unjust and brutal war,” said the Polish president, who shared the organization of the summit with Sweden, represented in Warsaw by Prime Minister Magdalena Andersson.

In total, more than 6,000 million euros have been raised, of which 200 million correspond to the European Union for the aid of internally displaced persons, as announced by the President of the European Commission, Ursula Von der Leyen.

“Today we meet with a clear purpose: to support the brave people of Ukraine, who fight against the aggressor and defend their freedom”, declared the head of the Community Executive, present at the conference together with the president of the European Council, Charles Michel, and other international leaders.

Read:  Egypt's president announces an extraordinary reshuffle of thirteen portfolios in the Council of Ministers

German policy has warned that the EU is aware that “much more” will be needed and has guaranteed the support of the community bloc in the future. In this regard, he recalled his proposal to provide a plan for the reconstruction of Ukraine with long-term international support.

“We know that more will be needed. And we will continue to defend Ukraine,” he stressed, after evoking the conference sponsored by the EU a month ago that allowed the collection of contributions and commitments worth 9,100 million euros in support of refugees fleeing from the war but also for those displaced within the country.

Zelensky has made the celebration of this conference coincide with the launch of an initiative to raise funds at the international level with which to help the Ukrainian authorities and society to face the ravages derived from the Russian military offensive.

The initiative, which is called ‘United24’, has as its first tool a portal from which to make donations in three different sections: defense and demining, medical aid and reconstruction. The funds will go to the National Bank of Ukraine, which will be in charge of distributing them among the different ministries, according to the website.

Read:  Brussels asks to extend the use of the Covid Certificate for unrestricted travel in the EU until June 2023

In his speech before the conference, Zelensky took the opportunity to demand a “rapid” integration of his country into the EU, which means, in his opinion, the immediate granting of candidate status and a “shorter” procedure towards full accession.

Zelenski has affirmed that Russia not only wanted to invade Ukraine, but also “deal a blow” to the EU, and considers that “greater unification would be a powerful response”. This happens not only because of “promises”, but also because of “practical steps” for which Ukraine already feels “ready”.

The Ukrainian president thanked Michel and Von Der Leyen for their work to make the EU “a true defender of freedom” throughout the continent and also recognized the work of Poland and Sweden as hosts of the donor conference.

During his speech, he emphasized that the war “is not only decided on the battlefield” and asked for help of all kinds, also from a financial and humanitarian point of view, among other reasons so that there can be a “normal life” in the “liberated territories” and begin reconstruction now.

In this sense, he has warned that Russia has been receiving “a massive flow of money” from European countries for decades thanks to its energy resources, an allusion that coincides with the open debate within the Twenty-seven on a possible veto on Russian oil.