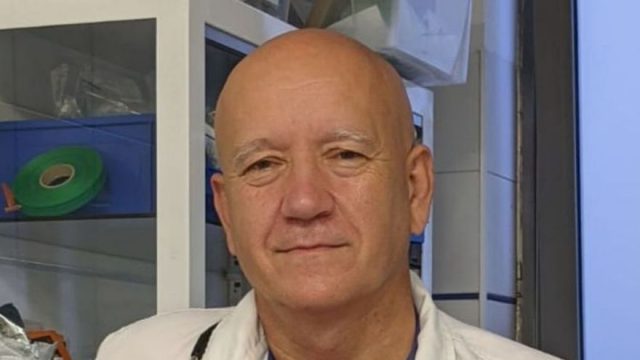 At “The monkey poet. Metamorphosis of a doctor and breast cancer researcher&rdquor; (Red Circle), Jorge Cameselle Teijeiro (Vigo, 1960), doctor of the PAC of Cangas and director of the Clinical Oncology Research Group of the Association of Breast and Gynecologic Cancer Patients of Pontevedra (ADICAM), gives testimony to younger physicians and their relatives of some of the difficulties he has had to overcome to be able to combine the practice of clinical medicine with his vocation as a researcher. Dr. Cameselle has directed multiple doctoral theses in medicine, all of them cum laude, and he is also a medical film director and screenwriter. The profits from the sale of the book will go to ADICAM to promote research on breast cancer and rare diseases.

-It was a book that I carried inside me. I felt the obligation to write it. On the one hand, to defend the sick, who are increasingly abandoned, and on the other, to denounce the fact that the obstacles to research in medicine are increasing. Although they want to sell us the opposite, clinical research in the field of health is deteriorating. Very much so. There is no interest in research for commercial, political and even ideological reasons (religious fanaticism).

-Since I was very young I had dreamed of being able to live and work as a doctor, but to dedicate part of my time to breast cancer research. The total lack of support from the Administration should have pushed me to throw in the towel. Somehow, I did not respond to collective conditioning and acted on my own, making my own decisions. Scientists, when they chose monkeys as laboratory animals to condition them to a conditioned reflex (Pavlov’s experiment), observed that there was always one that did not respond to conditioning and behaved freely. This monkey was colloquially called ‘poet monkey’. I have a feeling that the same thing has happened to me, hence the title of the book. I have always felt like a poet monkey.

One day I happened to post little stories on my Facebook wall. I was telling anecdotes from my biography as a physician and breast cancer researcher. I needed to make them public so that potential readers of my writings would become aware of the enormous potential that medicine has to improve the health of the population. I confess that I was surprised by the reception. I immediately realized that hundreds, even thousands of people were reading them. That motivated me and I got down to work, and I ended up giving it all the form of a book.

“Doing research is like taking a trip to the future. When you finish, you come back to the real world with new knowledge, some of which will be very useful in clinical practice.”

-To a large extent it is written for all health professionals: doctors, psychologists, nurses, physiotherapists…. I would like them to become poet monkeys, to rebel against a system that encourages you to remain inert, to not fight to change things, a system that is very unempathetic and insensitive to the pain of the sick and their families.

Read:  Getting into debt to go to the USA for an abortion: the obstacles to terminate a pregnancy in Spain

-Does medicine always have to be vocational?

-Of course it does. It should always be vocational. Unfortunately, the system of access to medical schools is not the most adequate. At present, vocation is not taken into account at all. In addition, places are intentionally limited for students in public medical schools, which are increasingly understaffed, and private schools are promoted. All this is not accidental. Studying in a private medical school, if you include the pension, costs around 3,000 euros per month. Who can afford that? Not everyone can do it. The sad thing is that many of the families of students who are left out of the system for economic reasons end up supporting their own “executioners” with their votes in the elections.

-He says that his great passion has always been research, but that he had to overcome many difficulties….

-In February 1989 I read my doctoral thesis on breast cancer and received my first “cum laude&rdquor;. Subsequently, thanks to this and other research, I received some national and international awards, which were important emotional incentives. But the most decisive thing for me was that I became aware very early on that research is like taking a trip to the future. When you finish a research project, you return to the real world with new knowledge, some of which will be very useful in clinical practice. I never had any financial support from the Galician Administration and that forced me to be self-taught. I survived by going on my own, making my own decisions.

“The current political situation has led us not only to not having time to do research, we also don’t have time to properly care for our patients.”

-When I started there was no Internet, so literature reviews were more difficult. You had to spend many hours in hospital libraries to access the best medical journals in the world. There was also no electronic medical record and reviewing each of those medical records (on paper) was a much more tedious and time-consuming task. Statistical packages were complex, unreliable and difficult to obtain. I overcame all these difficulties thanks to my tenacity and perseverance.

-Do young physicians who want to go into research also face the same obstacles today, or have new technologies paved the way?

-The new technologies have paved the way (electronic medical records, free Internet access for bibliographic reviews or the possibility of having professional and easy-to-use statistical programs); but today’s physicians are encountering new European Parliament regulations on Data Protection and on the Ethics of Research in Biomedicine that are a real obstacle to the progress of medical science and to the progress of society. I explain this in detail in the book.

-Have you had to give up time with your family or free time to dedicate yourself to the research?

-I think I have always prioritized the family over anything else. Any physician can do research if he or she takes time out of his or her clinical activity to ask questions and collect clinical data. Obviously, more ambitious research requires more time. Sacrifices are always necessary. But the current political situation has led not only to the fact that we do not have time for research, but also that we do not have time to properly care for our patients. We have never had a public healthcare system as deteriorated as the current one, and the private sector is not in such a bad state either. The root problem is the same: there is a lack of doctors, nurses, psychologists&mldr;

Read:  these are the main symptoms

-In the book you tell many anecdotes from your career as a physician, but what has influenced you the most?

-It would be impossible to limit myself to one anecdote. But I tell you two phrases that may have a bearing on what you are asking me: “When I need a colleague to help me, I look for the one who is the busiest. The one who is doing nothing is likely to be inhibited from helping&rdquor; and “The true masters, the geniuses, of which there are some, are always close, always generous with their time. The phantom doctors, the smoke peddlers, are always distant, arrogant and never have time for anything&rdquor;.

-Within research you have focused your efforts on breast cancer -Why?

-Perhaps because of everything I learned as a student of Professor Puente Domínguez, Professor of Surgery and of Pathological Anatomy. Then came other great teachers, such as Professor Senra Varela and Professor Schmitt. But the most decisive thing has been my daily work as a doctor. Seeing young women die of breast cancer always had a very special impact on me. Fortunately, they live longer now, but not always. In recent years my research interest has opened up to rare diseases, clinical genetics and recently to multiple sclerosis.

-A lot is said about humanizing medicine, but what is it?

-It is very simple: knowing how to empathize. Trying to understand the feelings and emotions of the patient, trying to experience objectively and rationally what he or she feels. Nowadays, overload and, therefore, lack of time play against empathy and good practices.

-How do you see the future of primary care?

-I dedicate a chapter of the book to the past, present and future of primary care. Galician public healthcare has never been as bad as it is now. The situation is very worrying and over the next few years it will get even worse. And this is coming from someone who is very optimistic. Politicians should be held accountable. They have known for years the age of the health workers and when they were going to retire, and that not enough doctors were being trained to replace them. If they had fulfilled their obligations, this would not be happening. Frankly, the only solution to the current disaster is at the ballot box.

-Many researchers are leaving to work abroad. How to stop the brain drain?

-And many more will leave. I am no longer talking about researchers but about MIR doctors who are currently training. They are not leaving. They are kicked out.

-And the most satisfying?

-Every day, when I know I’m helping someone.