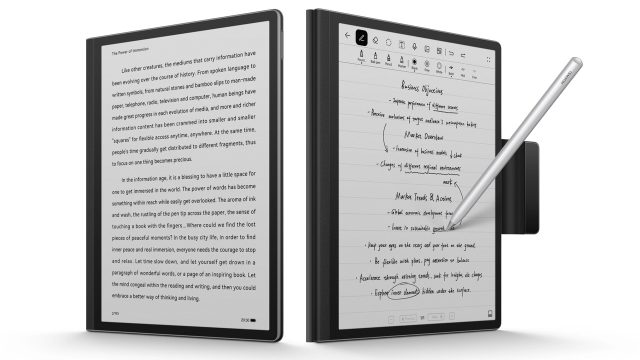 Mobile World Congress 2022 officially starts today, February 28, but Huawei has already had a presentation event in Barcelona on the occasion of this technology fair. The company has announced new products in the area of ​​productivity, in particular, but in addition to upgrades to the configuration of its laptops, the company has announced for the European market two new devices, which will surely attract attention: an all-in computer -one and a tablet with e-ink screen.

MateStation X: a high-performance all-in-one PC with a 3: 2 screen

The first all-in-one PC that Huawei brings to Europe is the MateStation X, a direct competitor to solutions such as Apple’s iMac. While Apple offers such computers for home use for simpler tasks, Huawei comes with a powerful configuration for high performance productivity.

We are dealing with a 28.2 ”IPS screen in 3: 2 format, something we don’t see much in the desktop area. It displays a resolution of 3,840 x 2,560 pixels, so it is a higher “4K”, which provides 98% coverage of the DCI-P3 color space. The audio part is made in partnership with Devialet, a company that also collaborates with Huawei for products such as the Sound X smart speaker, or the Sound Joy portable speaker. The MateStation X configuration is based on an AMD Ryzen 5 5600H processor, a model designed for laptops, but which has proven to be efficient in most use cases. It comes with 16 GB of RAM, 1 TB of NVMe M.2 SSD storage and features Wi-Fi 6, as well as USB-C, USB-A ports and a headphone jack. The wireless keyboard and mouse are included in the package, and the PC comes with Windows 11 preinstalled.

The price of MateStation X starts at 2,199 euros.

MatePad tablets are among the best built on the market and usually offer high-performance hardware for mobile productivity. However, Huawei believes that there is a place on the market for tablets that are less oriented towards gross performance, but that can help users in their daily lives by choosing more “special” components.

Thus, MatePad Paper gives up 120 Hz screens with billions of colors, in favor of a 10.3 ”e-ink panel, similar to what we see on ebook readers. It mimics paper and is built to be used instead of a diary. You can take notes, read documents, record sound while taking notes, or write on the surface of your hand with the M-Pencil stylus. Of course, the tablet can recognize handwriting to be turned into text documents. Huawei boasts a 26ms latency for the stylus, which should provide a good user experience on such a screen. The MatePad Paper e-ink tablet has a wider edge on the left side to have a grip area. Compared to a Kindle, Huawei boasts a 3 times larger screen, which will reduce the number of “turned” digital pages by 45%.

In terms of software, Huawei mentioned a modified version of HarmonyOS 2.0, which allows the transfer of content between tablet and smartphone or PC. It has 4 GB of RAM and 64 GB of storage, Wi-Fi 6+ and an on-screen fingerprint sensor with a battery that can last a month on standby. Everything takes place in a case that weighs only 360 grams.

The MatePad Paper tablet will start at 499 euros, with M-Pencil and folio cover included in the package.