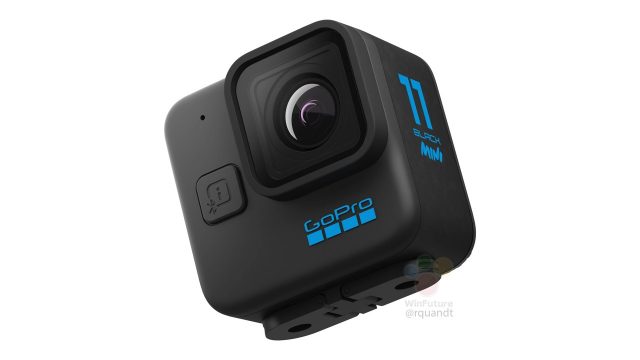 In addition to the new flagship Hero series, the 11 Black, GoPro plans to release a compact action camera. Images and some details of the new GoPro Hero 11 Black Mini have been released, again, by WinFuture, the German publication that seems to get information about GoPro action cameras quite often, as well as various unreleased smartphones. Unlike the Hero 11 Black, which has two screens, the Black Mini will not integrate screens of any kind.

A few years ago, when GoPro had multiple models on the market each year, the company also sold a camera called the GoPro Session, which was very small. This was updated for a few generations, but was eventually discontinued. The reason the Session wasn’t as successful was its capabilities below those of the top-of-the-line Hero model.

Read:  Bill Gates has exchanged his Galaxy Z Fold3 phone. The model he switched to

So, given the Hero 11 Black “Mini” name, expectations for the new compact model are that it will be able to deliver the same performance as the “standard” Hero 11 Black. The advantages, however, would be smaller dimensions and lighter weight, making it easier to mount. Apparently the accessory mount is still present at the bottom, meaning you’ll be able to mount the GoPro 11 Mini anywhere you can mount a regular Hero. What’s more, the Mini also has a rear mount, giving you even more options. Since it doesn’t have a screen, presumably everything related to setup and control will be in the mobile app or on a separate remote. The only buttons that can be seen from the pictures are the one for triggering and one with the Bluetooth symbol, probably used for pairing with other devices.

The good news is that the new camera appears to have a door, which seems to provide access to the card and battery slot, so it will probably use normal GoPro batteries. Interestingly though, the camera body has a “hot surface” symbol on it, suggesting that it will get hotter than a regular GoPro due to its small size.

It remains to be seen what the “target” is for this camera. Previously, GoPro also released the Hero 10 Bones, a screen and battery-free version of the Hero 10 dedicated to use alongside FPV drones. And the GoPro Hero 11 Black Mini model could lend itself well to this use case.