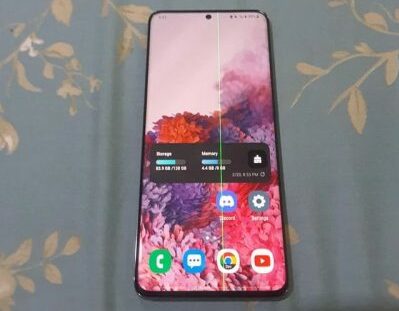 Launched two years ago, the Galaxy S20 phones are about to, or have just come out of warranty. So the news that a firmware update recently released by Samsung could induce a sudden screen failure is not good at all for users who would like to use the current smartphone for some time.

According to sporadic reports on the Samsung technical support forum, some Galaxy S20 phones remain with a green or pink vertical stripe, permanently visible on the screen. The fact that this problem seems to be manifesting itself all of a sudden and in a similar way on a small number of S20 phones so far raises some questions about a possible common cause.

For now, the only clue shared by the unlucky ones who run into this problem is the recent update of the Android firmware. However, the alleged hardware failure has been reported since August 2021, but in far fewer cases.

In the absence of a thorough analysis, it is impossible to tell if the problems have a real software cause, or if the defect once manifested can be “fixed” with another firmware update.

At least in this case, the problem reported to Samsung technicians was solved by replacing the screen for free. However, given that many Galaxy S20 phones are already out of warranty, it remains to be seen whether the South Korean manufacturer will also provide out-of-warranty repairs.

Read:  The Benefits of Cryptocurrency in Online Casino payments For Samsung, the problem may be more complicated than it seems at first glance. On the one hand, yes, the company is not legally required to repair defective phones outside of the warranty period. But if further investigation shows that screen failure can be caused by a software change that is insufficiently tested and applied to users’ devices through an automatic firmware update, mismanagement could affect the company’s image, while a collective lawsuit could lead to legal and financial consequences for Samsung.

For now, the whole situation is in speculation, awaiting further investigation and possibly an official solution from the South Korean manufacturer.