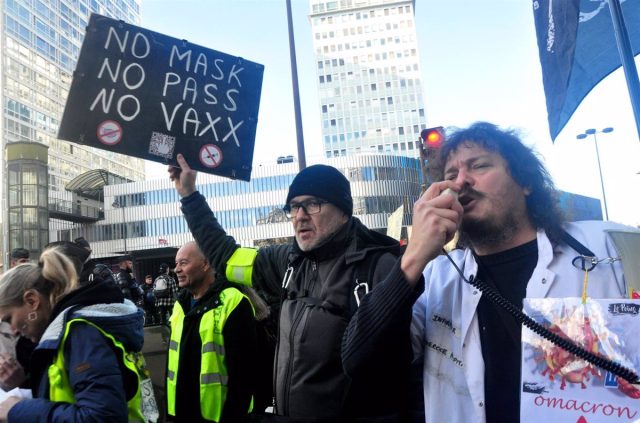 The Paris Police Prefecture has reported this Saturday of the arrest over the last few hours of 54 participants in the trucker protests who are trying to enter the French capital to protest against the restrictions against the coronavirus in the so-called Convoy of the Liberty.

The Minister of the Interior, Gérald Darmanin, has published a message on Twitter in which he has thanked the mobilized gendarmes and police “for enforcing the republican order” and guaranteeing “freedom of movement”. In addition, 337 parts have been filed for infractions in Paris alone and 32,100 protesters have been reported throughout France, of which 7,600 correspond to Paris.

According to the Police, some 3,000 vehicles have tried since this morning to enter Paris through the different accesses of the Super-peripheral ring road, where the agents have proceeded to first verbally admonish the participants of this unauthorized demonstration before proceeding with the arrests.

The vehicles come from Nice, Lille, Strasbourg, Vimy (Pas de Calais) or Chateaubourg (Brittany). They spent the night on the outskirts of Paris and this Saturday they tried to access the capital. Upon arrival in Paris, they were fined for participating in an unauthorized demonstration.

Of those detained, at least five have been handed over to the police in the south of the capital for possession of slingshots to throw stones, according to police data collected by ‘Le Figaro’.

Meanwhile, in Paris, about 7,200 police and gendarmes remain deployed “to enforce the prohibitions on vehicle convoys”, while observing the concentrations that are forming in various parts of the capital.

In particular, groups have been registered under the Arc de Triomphe and, above all, in the Plaza de Italia, where there have been attempts at confrontations resolved with the police launching tear gas.