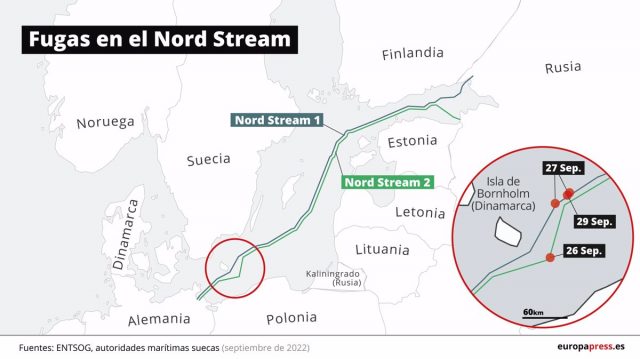 The Swedish Coast Guard on Thursday discovered a new gas leak in the Nord Stream 1 and 2 pipelines, bringing the total number of leaks to four, Swedish TV Channel 4 reported.

“Another gas leak has been discovered in the Baltic Sea, the Coast Guard confirms. This means that a total of four leaks have been found in Nord Stream 1 and 2,” the said channel has detailed during a live broadcast.

Sweden’s police intelligence unit (SÄPO) has taken over the investigation of the gas leaks and has ruled out the possibility that “a foreign power is behind” the alleged sabotage.

During the day on Tuesday, Denmark, Poland, the United States and Norway expressed suspicions that the pipeline leaks were the result of acts of sabotage. Seismologists in Sweden have gone further and confirmed explosions in the area hours before the leaks were confirmed.

Nord Stream operator Nord Stream AG said Tuesday that the damage to the pipelines late Monday was “unprecedented” following a gas leak in one of the sections of Nord Stream 2 and a loss of pressure in Nord Stream 1, with no known causes at this time.

Read:  Israel beefs up security and deploys drones on Gaza border ahead of possible attacks