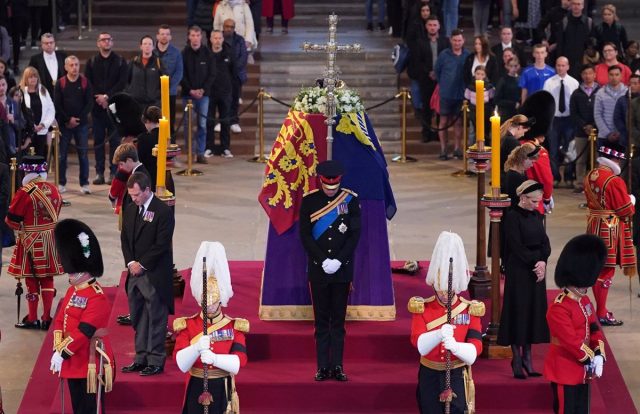 The eight grandchildren of Elizabeth II have made this Saturday a traditional vigil guard around the coffin of the late queen led by the Prince of Wales, William.

The Duke of Sussex, Henry, Prince William’s brother, as well as Peter Phillips, Zara Tindall, Princesses Beatrice and Eugenie, Louise and Viscount Severn, James, have also taken part. The eldest is Peter Phillips, 44, while James is 14.

William and Henry have worn very similar black military uniforms. William’s is the number 1 uniform of the Royal Horse Guards and 1st Battalion Dragoons adorned with the Order of the Garter sash, the Star of the Order of the Garter, the gold, diamond and platinum Jubilee medals and the wings of the British Royal Air Force.

Read:  Dozens of migrants missing after boat sinks in the Aegean

Henry also wears the No. 1 uniform of the Royal Horse Guards and 1st Dragoon Battalion, the Knight Commander’s Star of the Royal Victorian Order, the Operational Service Medal in Afghanistan, the diamond and platinum Jubilee medals and the Army pilot’s wings.

The doubt was whether Prince Henry could wear military uniform at the vigil, now that he is not officially part of the Royal Family, but in the end he was able to wear it at the express request of his father, King Charles III. The other six grandchildren wore rigorous black similar to the one they have already worn in other events since the death of Elizabeth II.

Read:  Biden says HR "will always be on the agenda" during visit to Saudi Arabia

This tradition is formally called the Princes’ Vigil. It was inaugurated in 1936, when King Edward VIII and his three brothers, Albert, Henry and George, surrounded the coffin of their father, King George V. Since then it has only been repeated in 2002 with the Queen Mother.

Last Sunday it was the queen’s four children who held the vigil for about 15 minutes around the coffin at St. Giles’ Cathedral in Edinburgh.