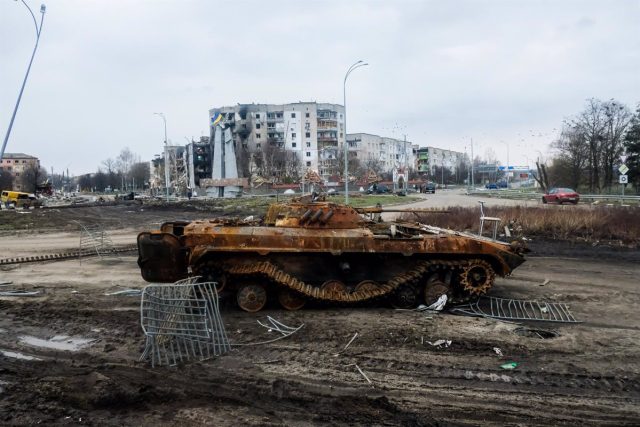 05 April 2022, Ukraine, Borodjanka: A destroyed Russian battle tank stands in the main square of Borodyanka, a small village near kyiv. As Russian forces withdraw from the area around the capital, the extent of the damage and loss of life resulting from t – Matthew Hatcher/SOPA Images via / DPA

The former Ukrainian Interior Minister, Arsen Avakov, reported late Wednesday that eleven bodies have been found in a garage in Gostomel, on the outskirts of kyiv, the capital of Ukraine.

“In Gostomel, near Bucha, in one of the garages on Svyatopokrovskaya Street, the Police found eleven dead civilians. Locals say that the snipers shot people and then put the dead in the garage,” he said in his statement. Avakov’s Facebook account, according to the Ukrainian newspaper ‘Ukrayinska Pravda’.

Gostomel, northwest of Ukraine’s capital kyiv, with an airfield nearby, has been hotly contested since the start of the war. A few days ago, Ukrainian troops regained control of this city and the neighboring towns of Bucha and Irpin.

The head of the military administration of Gostomel, Taras Dumenko, assured on Tuesday that, after 35 days of occupation by Russian troops in this town in the kyiv region, more than 400 people were missing, according to the Ukrainian press. .

In addition, on Wednesday night the kyiv State Administration has reported that the anti-aircraft alarms have been heard again in the city. “Attention! An air alert has been declared in kyiv!” His Administration warned in a statement on Telegram, as reported by the Ukrinform agency.