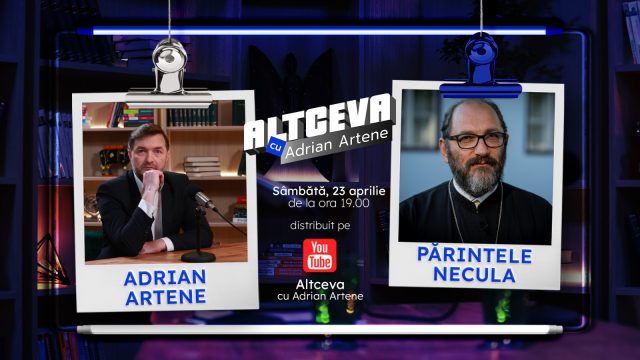 Father Constantin Necula is the guest of Adrian Artene in the podcast ALTCEVA on Saturday, April 23, in a special edition dedicated to the Easter holidays.

Don’t miss a new edition of the podcast that will be broadcast starting at 7 pm on the YouTube channel ALTCEVA with Adrian Artene!

Father Necula, one of the most appreciated and popular Christian Orthodox priests in Romania, talks about the war in Ukraine and where God is in this bloody war.

At the same time, he talks about Nicolae Ceaușescu and talks about how the dictator paved the road to Tismana Monastery.

Read:  OnePlus Ace has been officially announced in China. Comes with 150W charger and MediaTek processor

Adrian Artene has been publishing in the national press since 1996. He has a double degree in Journalism and Law, and two master’s degrees in Theology and Criminal Sciences. He is the author of the book “State Mafia”, but also of the volumes of poems “Loves for which God also cried” and “The punctuation of love”.

Read:  Option for WhatsApp messages to "self-destruct" after being read ready for launch