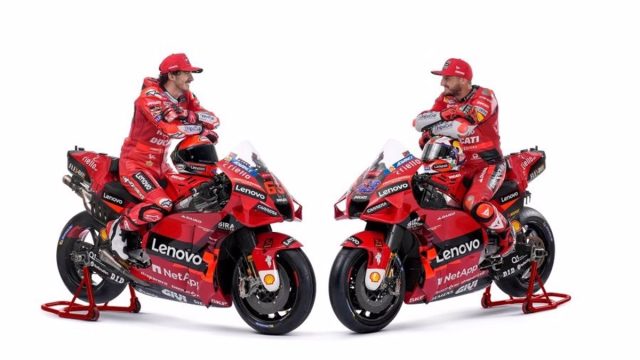 Ducati presented this Monday the motorcycle with which it intends that the Italian Francesco Bagnaia and Jack Miller can be “protagonists in any race and condition” in the Motorcycle World Championship that will start in March.

As indicated by the Borgo Panigale factory, the great novelty of the design of the Desmosedici GP 2022 is in the colors since for the first time it wears ‘Ducati Red’, the original hue that has always characterized the production and street motorcycles of the Italian house.

“We are really excited to finally be able to start this new season. In 2021 we achieved important results by winning our third Constructors’ title and finishing the drivers’ championship in second position with Francesco Bagnaia”, celebrated Luigi Dall’Igna, general manager of Ducati, in a statement. brand statement.

The team leader acknowledges that the world runner-up “grew a lot” during the last Grand Prix of the year and was “convinced that this year he will also be confirmed as one of the main protagonists of the championship”, along with Jack Miller, who ” Last season he showed all his talent on many occasions, conquering five podiums, including two exciting victories.”

Read:  Marc Márquez: "Everyone expects him to come back, but there's no need to be in a hurry"

“Both he and ‘Pecco’ have all the potential to be able to play for the title. Obviously, it will not be easy and we know that the fight for the championship will be even closer as there are several strong drivers and the rival factories have also worked hard during the winter to achieve an even more competitive package,” he added.

In any case, he warned that Ducati has also “demanded a lot in recent months to try to give ‘Pecco’ and Jack a Desmosedici GP22 that allows them to be protagonists in any race and in any condition”. “It will be a very tough season with 21 Grands Prix currently confirmed, but we are ready and eager to hit the track to reap the rewards of our hard work,” he said.

For his part, Francesco Bagnaia is “happy for the start of this new season” and after finishing 2021 “with a positive dynamic”. “I hope to be able to resume 2022 like this too. Together with my team I grew a lot last year and I feel really good with the group, so I’m sure that together we can do great things.”

“The Desmosedici GP in this new color is even more beautiful and I can’t wait to race it again. The goal for this year will always be to constantly improve and try to be competitive in every race. We will fight to try to bring back the Drivers’ title, in addition to the Teams and Constructors title”, added the Italian.

Finally, Jack Miller stated that he is “more prepared than ever to face this new season.” “Having another year of experience in MotoGP makes me feel stronger and, moreover, I feel that I have improved both physically and mentally in 2021,” he said.

“This will be my second year with the Ducati Lenovo Team, a really passionate group of people that I feel very lucky to be a part of. Belonging to the official Ducati team is a source of pride and also means having the support of many fans, not only in Italy, but all over the world. I can’t wait for March to come to dispute the first race of the year in Qatar”, sentenced the Australian.