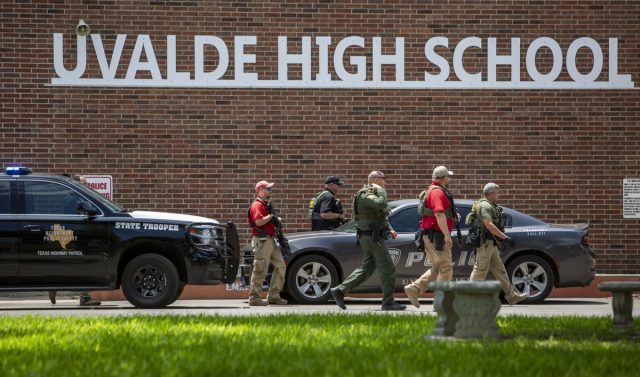 At least 21 people have died, 19 of them children and two adults, in a shooting that took place this Tuesday at the Robb elementary school in the city of Uvalde, in the state of Texas, in the southern United States.

This has been confirmed by the sergeant of the Texas Department of Public Safety, Erick Estrada, to the US network CNN, who has also specified that the suspect, identified as Salvador Ramos, a resident of Uvalde, has shot his grandmother before entering the school with a rifle in hand.

“The suspect crashed near a ditch near the school. That’s where he got out of his vehicle with what I believe was a rifle and that’s when he tried to get into the school where he came into contact (was killed) with police.” has indicated.

Estrada has also specified that the 18-year-old was wearing a bulletproof vest, a rifle and a backpack. The shooter, before entering several classrooms with the gun in his hand, shot his grandmother, who has been airlifted to a hospital in San Antonio and is in critical condition.

The spokeswoman for the Department of Homeland Security, Marsha Espinosa, has posted on her official Twitter profile that law enforcement officials, both border and US Police, have been shot by the shooter, who had dug in.

“At the risk of their own lives, these Border Patrol agents and other officers stand between the shooter and the children at the scene to divert the shooter’s attention from potential victims,” ​​Espinosa said.

Multiple survivors are being treated in regional hospitals, so the death toll could rise in what is already the largest massacre since 2012, when the young Adam Lanza, 20, entered the Sandy Hook school in Connecticut, where 20 children and six adults died.

Read:  The report on the parties in Downing Street accuses the Government of "failures of leadership and judgment"

According to the US network NBC News, Democratic Senator Roland Gutiérrez has indicated that the shooter bought two semi-automatic rifles when he turned 18 at an armory in the Uvalde area.

At first, the governor of Texas, Greg Abbott, confirmed that they had “horribly and incomprehensibly shot and killed 14 students and a teacher,” he explained during a press conference collected by the ABC network.

“It is believed that (the shooter) got out of his vehicle and entered Robb Elementary School in Uvalde with a handgun and may also have had a rifle, but that is still unconfirmed based on my most recent report,” Abbott said. , according to CNN.

The governor has also called what happened “horrible” and has assured that it is something that “cannot be tolerated.” “Texans across the state mourn the victims of this senseless crime and the Uvalde community,” he said.

“I have instructed the Texas Department of Public Safety and the Texas Rangers to work with local law enforcement to fully investigate this crime,” Abbott said.

For his part, the mayor of Uvalde, Don McLoaughlin, had previously acknowledged to the aforementioned television that the situation was “very bad” and that his team was trying to contact the parents of the children to transmit all the information they have.

Similarly, the Department of National Security has confirmed on its social networks that Secretary Alejandro Mayorkas is being informed of the attack and that the entity is coordinating with local agencies to address the situation.

Previously, the Uvalde Consolidated Independent School District had reported on its Twitter profile that there was an “active shooting” in the vicinity, for which it had asked the population to move away from the area. Later, the body has announced the suspension of all school activities in the district.

Read:  US creates fund to manage frozen funds to Afghanistan without them falling into Taliban hands

Thus, he stressed that “enough is enough.” “As a nation we have to have the courage to take action and understand the nexus between what constitutes reasonable and sensible public policy to ensure that nothing like this happens again,” she added.

The shooting happened on the same day as the elections in Texas, when voters from all over the state went to the polls for the primaries that set the stage for the November vote, according to the newspaper ‘The New York Times’ .

A few moments ago there was a shooting at Robb Elementary School in Uvalde, where the approximately 18-year-old assailant killed 14 students and a teacher. pic.twitter.com/Bh9orGbaBl