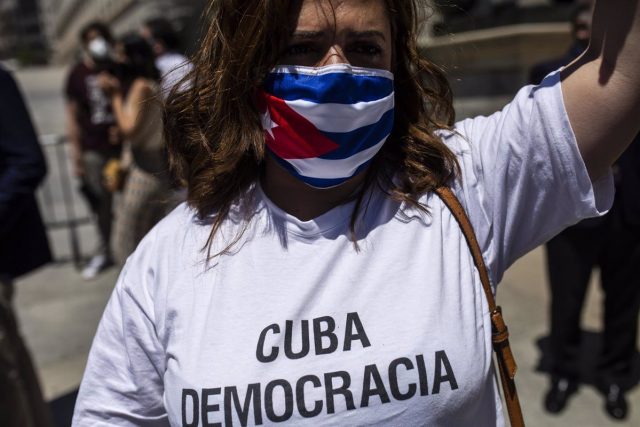 EU and US urge Havana to respect human rights and freedoms of the population.

One year after the wave of anti-government protests recorded in July 2021 in Cuba, when thousands of people took to the streets to demand greater economic stability and better healthcare, the island is mired in a serious crisis.

What was the first mass demonstration in decades resulted in more than a thousand people arrested and hundreds charged, which has led to the imposition of sentences for crimes such as sedition, sabotage and robbery with force, among others, which have been condemned by the international community as an attempt to silence dissident voices.

The main trigger for the marches that took place between the capital, Havana, and Santiago de Cuba, was the lack of resources to deal with the coronavirus pandemic. Then, the demonstrators demanded more vaccines from the government and called against repression and censorship.

The government of Cuban President Miguel Díaz-Canel then called on his supporters to take to the streets to respond to the protesters claiming that many were “confused” and pointed to the United States as the one responsible for driving the protests.

He thus accused Washington of restricting the island’s economy and seeking its “destabilization” for decades. Havana blames the U.S. embargo on the island, the consequences of which have worsened in recent years. However, voices critical of the government claim that it is a matter of mismanagement and advocate a change in the political system of the Caribbean country.

According to the official newspaper ‘Granma’, the objective is to generate the “false idea” that the shortages and material difficulties respond to the “inefficiency of the revolutionary government’s management and to cover up the real cause: the inhuman economic siege of the United States”.

This Monday, the High Representative of the European Union for Foreign Affairs and Security Policy, Josep Borrell, expressed his concern about the situation in Cuba and pointed out that at least 790 people have been charged in connection with the protests since mid-July 2021.

Read:  About 50 people rescued in a boat south of the Italian island of Lampedusa

“Since then, the European Union has closely followed the disproportionate sentences against protesters, some of whom were under the age of 18 when they were arrested,” he has asserted in a statement.

In this sense, it has affirmed that the trials call into question the human rights situation in Cuba and the violation of “international standards and principles of transparency.”

“During the last twelve months, the EU has reiterated its call on the Cuban government to respect the human rights and freedoms of the Cuban people, including the right to free association and assembly,” the text states. In addition, Borrell has stressed the importance of “freeing all political prisoners” and opening dialogue to address the crisis.

The EU has again requested, in turn, that the Cuban authorities allow the diplomatic community to attend the trials and has offered its support to “protect and promote” the human rights and freedoms of Cubans and improve their quality of life.

In August 2021, shortly after the protests, the government approved Decree Law 35, aimed at content or messages that Havana considers false news, offensive or that may incite acts “that alter public order.”

Cuban Foreign Minister Bruno Rodriguez has reproached Borrell and stated that “the EU lacks the moral authority to make value judgments on the Cuban reality.”

Thus, he has emphasized that the European Union “should deal with its own problems and the frequent violations of Human Rights in its member states.”

For his part, the U.S. Secretary of State, Antony Blinken, asserted on Monday that Washington “recognizes the determination and courage of the Cuban people”, as they “continue to fight for the respect of Human Rights and persevere, despite the repression, during a historic year”.

In a statement, he has thus celebrated “the indomitable determination” of the Cuban citizenry “in the face of oppression.” “Americans watched in awe on July 11, 2021 as tens of thousands took to the streets to raise their voices,” he said.

Read:  Texas authorities acknowledge errors in the operation to neutralize the perpetrator of the Uvalde massacre

In this regard, he has condemned the prison sentences against the protesters and has described as “unacceptable” that more than 700 still remain behind bars. “The United States will always remain with the Cuban people,” he reiterated.

On the other hand, Blinken has also highlighted that both peoples “share strong ties of family and friendship, as well as a fervent desire for freedom, prosperity and future.” “We will continue to stand with the Cuban people in support of their struggle for democracy, including by promoting the accountability of Cuban regime officials for human rights abuses,” he concluded.

The Cuban Foreign Minister stressed that Cuba rejects “the comments of the US Secretary of State confirming the direct involvement of the US government in attempts to subvert order and peace in Cuba, in violation of international law.”

DEFENDERS PUTS THE NUMBER OF POLITICAL PRISONERS AT ALMOST A THOUSAND.

The NGO Prisoners Defenders has warned that while before the July 11 protests there were 152 political prisoners, a figure that now stands at 999. Of these, 33 are minors and five of those minors are girls, the organization said.

In a statement, it has denounced that many of them have been accused of sedition and have been sentenced to sentences of five years or more, in addition to forced labor. “The dictatorship used the 11J to imprison the most respected and prominent activists, such as José Daniel Ferrer, whose situation of forced disappearance, one year after his arrest, has just been denounced by the United Nations”, it has asserted.

Thus, he has asserted that of the more than 5,000 detainees, 1,235 were prosecuted and “sanctioned”, in addition to being subjected to “forced disappearances”. “Mothers stood in long lines looking for their children in police stations,” the document indicates.

The July protests were followed by a series of marches called for November 15, 2021, although these demonstrations were quickly thwarted by security forces.