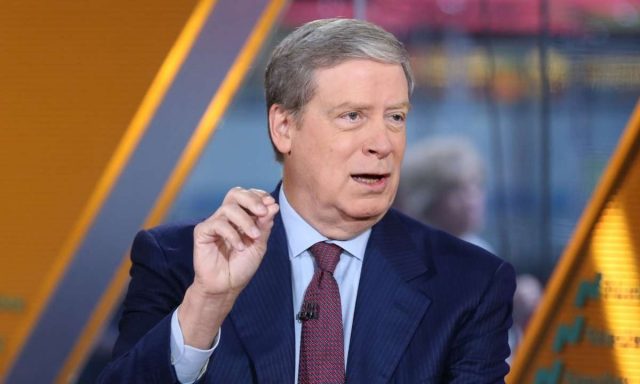 The capitalization of the global crypto-currency market is down nearly 70% this year, largely due to the Federal Reserve’s commitment to raise interest rates. Nevertheless, investor Stanley Druckenmiller sees a glimmer of hope for the space.

Stanley Druckenmiller calls for a rebound

Despite crypto-currencies falling due to the global economic meltdown, Stanley Druckenmiller believes the fledgling asset class could see a revival as the macroeconomic situation worsens.

Speaking in the program CNBC’s “Delivering Alpha” Conferencethe American investor discussed the current macroeconomic landscape and added comments on how digital assets such as Bitcoin and Ethereum could be affected.

Stanley Druckenmiller said he believes the U.S. economy could suffer from a “hard landing” in the medium term, adding that it would be “stunned if we had not … [une] recession in 2023“.

Stanley Druckenmiller chose not to mince words when discussing the bleak macroeconomic picture. He declared that the United States was “in deep trouble” and issued an ominous warning that “something really bad” could happen because of the deteriorating state of the economy.

While Stanley Druckenmiller’s comment may be enough to scare investors around the world, given his track record with market cycles, he did suggest that there may be a glimmer of hope for crypto enthusiasts. Stanley Druckenmiller put forward the idea of a “renaissance“of crypto if people start to lose faith in central banks.

Read:  Jim Cramer is not worried about Credit Suisse. Does that mean we should be?

The world’s most powerful central bank, the Federal Reserve, has had a stranglehold on global markets this year as inflation has soared, and crypto assets like bitcoin have not been spared. The value of the crypto-currency space is at about 68% of its November 2021 peak, mainly due to market exhaustion and the Fed’s commitment to raise interest rates.

The Fed announced a third consecutive 75 basis point rate hike on September 21, sending Bitcoin, Ethereum and stocks sliding. Fed Chairman Jerome Powell has repeatedly indicated that the U.S. central bank is targeting a 2% inflation rate, but inflation has not shown any significant slowdown; the latest print of the Consumer Price Index came in higher than expected at 8.3%. This suggests that further rate hikes by the Fed may be on the horizon.

While bitcoin is down more than 70% from its peak of $69,000, it has also seen some stabilization amid the current economic uncertainty. When inflation slowed last month, the leading crypto rallied on market hopes of a possible end to the so-called “crypto winter“. The crypto-currency market also reacted positively to the Fed’s July rate hike, as the 75 basis point increase was less than some economists expected.

Read:  Ethereum may be down since the merger, but this could be a unique buying opportunity

Still, the Fed’s hawkish attitude has had a significant impact on crypto this year, and the market’s slide continues. Stanley Druckenmiller’s argument is that the asset class could see a rebound, not because the Fed has gone from hawkish to dovish…–but because people might lose all confidence in central banks like the Fed.

Bitcoin has long been touted as a hedge against inflation because of its scarcity (there will never be more than 21 million coins), and major players like MicroStrategy and Paul Tudor Jones have helped evangelize this thesis. More recently, however, its ability to serve as a bet against inflation has been questioned. If Stanley Druckenmiller is right, crypto could finally have its day. But first the market will have to help it trade independently of the Fed.