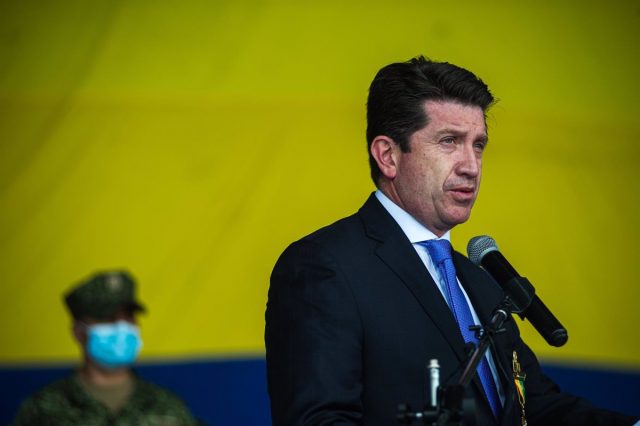 Colombia’s outgoing Minister of Defense, Diego Molano, has held a meeting with Iván Velásquez, who will succeed him in the post once Colombian President-elect Gustavo Petro takes office on August 7.

According to Molano himself, he has placed himself “at the disposal” of Veslásquez in case the next person in charge of the Defense functions requires him to “develop some complementary action of information”.

“I wish that every person who arrives at the Ministry will do well for the future of the (Armed) Forces. Everything that is done, must be with respect, with appreciation, with affection and with recognition to the history of our Armed Forces”, said Molano.

The official has valued his management at the head of the Ministry of Defense, especially in what he has called the campaign against “symbols of evil”, according to Caracol Radio.

Molano emphasized that, under his leadership, about 190 “leaders of armed groups” have been apprehended, including leaders of the Clan del Golfo, the National Liberation Army (ELN) or the dissidents of the extinct Revolutionary Armed Forces of Colombia (FARC).

“We are working for a transformation of the Police, which has allowed us this semester some good results in the reduction of crimes such as homicides and thefts”, added the official.

President-elect Petro last week appointed Velasquez, who throughout his career has served as an assistant magistrate of the Supreme Court, responsible for a police investigation against parapolitics, as future Minister of Defense.