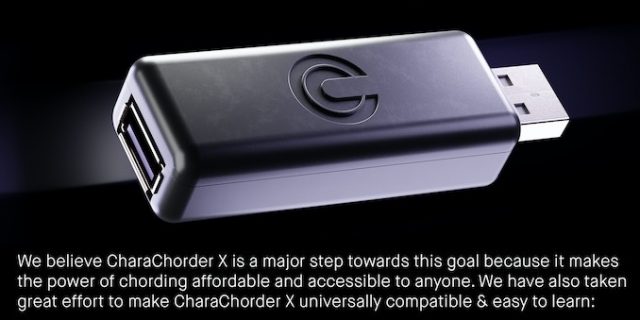 A company called CharaChorder claims to have the solution to speed up computer users’ typing by up to six times with a simple USB accessory. The CharaChorder X dongle allows multiple simultaneous keyboard button presses to be interpreted to form complete words, in a manner similar to the way court clerks type court transcripts.

The use of “chrods” for entering text is not new. It is used in courtrooms to quickly record everything that is spoken in the courtroom. However, court clerks use specialised hardware, those keyboards being specially designed for transcription, using different buttons from the keys on a normal “QWERTY” keyboard.

CharaChorder X, however, wants to bring chord text input to all computer users, interpreting keystrokes into chord text. Basically, it’s a device that connects to your PC on a USB port, and on the other side you can plug in any keyboard to enter text. The device receives the signal from the keyboard and turns your seemingly random keystrokes into full words on the computer screen. So you can go from 40 words per minute (the average PC user) to 250 words.

Of course, learning to type with a CharaChorder X device takes some getting used to. The device already comes with default “chords” for English, but users can add their own chords (shortcuts) to words. The device can store over 65,000 shortcuts locally, so you should be able to write complex texts smoothly and very quickly.

The accessory is compatible with all devices

The advantage of entering chord-based text is that you can press three or four keys simultaneously to form complex words made up of several letters. Entering text on a keyboard requires successive keystrokes in the correct order for each word, which can take a long time for more complicated words. Typing with chords should provide a speed closer to the speed of thought, say the creators of the device.

Read:  How you can generate green energy from rainwater at home, simply CharaChorder X is now available as a project on Kickstarter. Backers of the project can order it for $39 at the draft stage. At launch, the device will cost $100. Fortunately, by its very nature, being an intermediary between a keyboard and a computer, it works without drivers and allows compatibility with all major operating systems such as Windows, Linux, macOS and even mobile ones like iOS and Android.