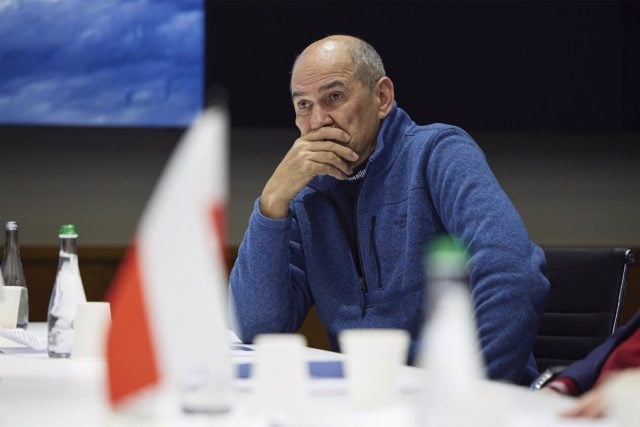 The Prime Minister of Slovenia, Janez Jansa, faces the real possibility of losing power in the legislative elections this Sunday in the face of a new opposition movement that has served throughout the electoral campaign as an echo chamber for criticism of corruption. and authoritarianism that have accompanied the president for much of his long political career, and have gradually eroded his mandate in recent months.

The figure of Jansa, 63 years old, accompanies the history of Slovenia even before its independence from Yugoslavia in June 1990, during the previous process of national democratization that made him the promoter of the national Constitution. Jansa, Minister of Defense during the brief armed conflict that led to the separation of the country, began a political journey marked by two fundamental aspects: the extremism of his political discourse and his problems with the law.

The latter became evident during the following years, beginning with his subsequent decade in opposition, where he combined a commitment to integration into the European Union with a staunch defense of the country’s traditional values. This platform brought him to power for the first time in 2004, at the head of the Democratic Party (SDS), the first of his three terms. The second of them, in 2012, was marked by a corruption scandal that would culminate in a prison sentence in 2013 for trying to take a commission on an arms contract — the so-called “Caso Patria” — finally revoked two years later by the Constitutional Court on understanding that their rights had been violated during the procedure.

Jansa’s third term, which began in March 2020, presented a politician close to, but not completely in tune with, the Eurosceptic populism championed by other leaders such as the Hungarian Prime Minister, Viktor Orbán, or the Serbian Aleksandar Vucic. Although Jansa has been closer to Brussels than his two colleagues, he has not hesitated to accuse fellow MEPs of belonging to globalist conspiracy movements, defended the figure of former US President Donald Trump, and rejected the accusations from the European institutions that have pointed out to him for pressuring the country’s media or attacking the independence of the Judiciary.

All these criticisms, added to those made within his own country for his management of the pandemic, ended up germinating in a motion of censure made last year against the president. Jansa barely survived: the motion was six votes short of fruition. Twelve months later, the opposition against Jansa, far from dissolving, appears stronger than ever in the form of the so-called Freedom Movement, led by Robert Golob.

ELBOW WITH ELBOW IN THE POLLS

Golob, former president of the state-owned energy company Gen-I, took over the reins of a small pro-environmental party without parliamentary representation in January this year that has ended up amassing enormous support among the center-left opposition and somehow diverting attention from the war in Ukraine (both opponents have declared their support for kyiv in the face of the Russian invasion) to turn this vote into a plebiscite on the weakened figure of Jansa.

Read:  Norway will pressure the Taliban with "tangible demands" in exchange for sending humanitarian aid

His platform, which conceives these elections as a “referendum on democracy”, defends political transparency and proposes an increase in investment in renewable energy, has earned him so much political support that not even an electoral defeat would detract from his chances of coming to power. : According to the polls, there are six parties that could end up in Parliament this Sunday, some of which could be crucial in deciding behind the scenes what is not achieved at the polls.

The polls could hardly be tighter. Jansa’s party leads the Movement by 0.1 percent in voting intentions, according to a survey published on Tuesday by the ‘Dnevnik’ newspaper, but the latter enjoys a huge pull among the still undecided population, which comprises a quarter of those surveyed, explains analyst Andraz Zorko, from the Valicon think tank, to Bloomberg.

For the analyst, the participation data will be fundamental. A high attendance will favor the Golob Movement, and all the estimates seem to point to it: a minimum of 60 percent is expected, ten points more than in the last elections of 2018.