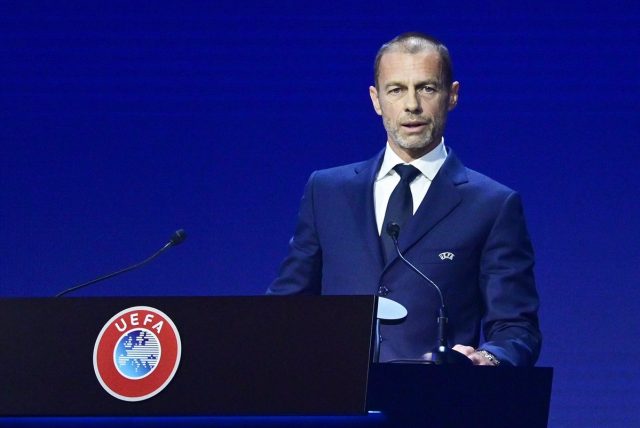 The president of UEFA, Aleksander Ceferin, defended this Wednesday “the unprecedented sanctions” against Russia after the invasion of Ukraine, necessary because “the tradition of neutrality in sport cannot be maintained in 2022 in a war situation”, although could set “a dangerous precedent”.

Ceferin explained at the UEFA Congress in Vienna on Wednesday that football has been one of the losers in this war, with wide-ranging sanctions imposed on both Russia and Belarus for which the body has had to “leave its comfort zone” and take action.

“Football is undoubtedly the loser, one of the losers, we are depriving players, coaches and fans who have nothing to do with this situation of their passion and their dreams,” said the head of European football.

The Slovenian valued that “when UEFA raises unprecedented sanctions, football tries to make its small contribution to society and helps European leaders in their effort to achieve peace on our continent.” “Promoting a spirit of peace in European football is also a statutory objective of UEFA,” he added.

“It may be setting a dangerous precedent, but in this case the cause is much greater than any other. The reason is greater than the careers of hundreds of footballers and the tradition of neutrality in the sport cannot be maintained in 2022 in a war situation,” argued Ceferin.

Read:  UEFA "will make decisions" this Friday before Russia's military invasion of Ukraine

UEFA has sanctioned both the clubs and the teams of Russia and Belarus and has deprived St. Petersburg of hosting the Champions League final this year. Who has not yet been suspended is the Russian Football Federation (RFU), which was present in Vienna led by its general secretary, Alexander Alayev, while the Ukrainian delegation participated electronically.

However, Ceferin told the media after the congress that he would not rule out “anything” when asked about a possible suspension of the RFU in the future, noting that “it is too early to talk about it” and hoping that the war will end soon. soon as possible.

VERY CRITICAL ABOUT WHAT HAPPENED AT WEMBLEY DURING THE EURO2020 FINAL

The head of UEFA was also very critical of the scenes of violence and chaos in the Euro 2020 final experienced last year at Wembley, which he described as unrepeatable.

An independent investigation into the disturbances at London’s National Stadium last July identified more than 20 “near misses” that could have resulted in serious injury or death.

Wembley continues to enjoy the favor of Ceferin and UEFA, and the inaugural edition of the ‘Finalissima’ will be held at the stadium, a match that will pit the winner of the European Championship, Italy, against the Copa América winner, Argentina, who will be played next month, as well as the final of the Women’s Euro Cup this summer.

Ceferin insisted that the lesson of last summer must be learned. “The images of violence at Wembley last summer during the European Championship final were unacceptable,” said the Slovenian manager.

“When a family goes to watch a football match in the European Championship or any other competition, they have to have fun, have a good time, watch football. People have to feel safe around a football stadium, they should never feel in danger, and that day they did. With the help of the authorities, this can never happen again,” Ceferin said.