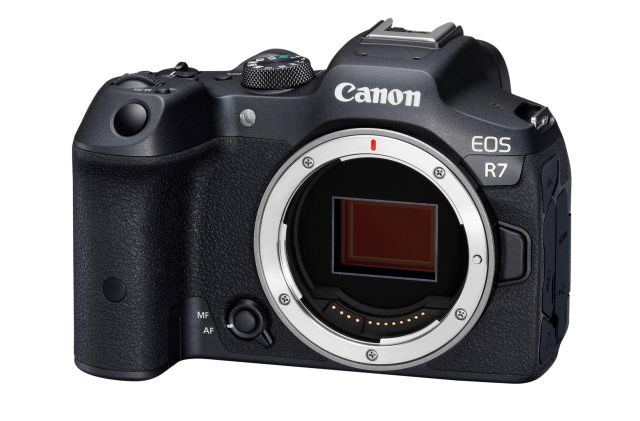 Canon has launched its first APS-C sensor cameras in the EOS R mirrorless range. These are called the Canon EOS R7 and EOS R11 and come at more affordable prices than the 35mm full-frame sensor models. However, they do not compromise on shooting or filming capabilities and also introduce the first APS-C format lenses in the EOS R range, but they can also be used with the full-frame lenses already launched.

The Canon EOS R7 is Canon’s answer to competing cropless mirrorless models, such as the Sony a6600 or the Fujifilm X-T4. It features a 32-megapixel APS-C sensor with in-body stabilization (IBIS). Canon says it allows stabilization at 7 stops on 5 axles, being the best performance in this price category. The camera is equipped with two UHS-II SD card slots and uses the same batteries as the R6 and R5 cameras, which can provide up to 660 frames in use.

The screen on the back is mounted on an articulated arm, which allows you to turn 180 degrees for vlogging. This is a medium resolution display with only 1.62 million dots, while the dedicated viewfinder uses an OLED panel with 2.36 million dots. Its shooting capabilities could recommend this camera even for sports photography, with the ability to capture 30 frames per second with electronic shutter and 15 frames per second with mechanical shutter. The buffer can record 100 compressed RAW frames before slowing down shooting, giving you a good few seconds of continuous shooting.

Being an EOS R series camera, the new EOS R7 also “inherits” some of the “Dual Pixel” focusing capabilities on the company’s flagship EOS R3. Thus, both in photo and video mode, you have a focus on the subject, on the eyes, or on the face, even with real-time tracking.

In fact, the EOS R7 allows recording in HDR PQ format, for editing HDR content, as well as in a neutral color C-Log 3 profile in 10 bits.

EOS R10 is the budget solution, with compromises in some respects

For those who do not need all these advanced capabilities, or have more limited budgets, Canon also comes with EOS R10, also an APS-C camera, but with a smaller body. This model weighs only 426 grams, compared to 612 on the R7, and comes with a 24 megapixel sensor without internal stabilization. There is the possibility of electronic stabilization on film, which adds a crop factor.

The screen on the back has a lower resolution, but the electronic viewfinder is identical. This model also has a lower speed in electronic shutter mode, at 23 FPS, but keeps the 15 frames per second in mechanical mode. The buffer is much shorter, being able to record only 30 frames at a time.

With a smaller body comes a smaller battery, and the headphone jack disappears, making it impossible to monitor the sound during recordings. However, 4K filming remains unchanged: 4K 30 with oversampling or 4K 60 with 1.56x crop. 10bit and HDR PQ shooting also exists on the EOS R7, but not the Log format shooting option.