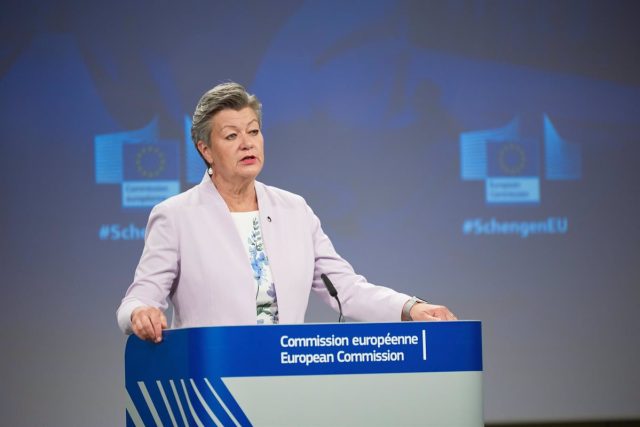 The Commissioner for the Interior, Ylva Johansson, denounced this Thursday the use of the rape of thousands of women in Ukraine by Russian soldiers as a “weapon of war”, while at the same time claiming the right to abortion for the victims of this violence. and demanded that they be allowed “immediate and unconditional” treatment.

“Russia is not only waging a war against Ukraine, Russia is waging a war against women. We have credible information that soldiers are raping women and girls from the ages of ten to seventy,” the commissioner described in a debate at the plenary session of the European Parliament meeting in Strasbourg (France).

For this reason, the commissioner has defended that women who suffer rape and sexual violence “must have the right to abortion”, for which she has demanded their access to reproductive health policies to receive treatment “immediately and unconditionally”.

Johansson explained that efforts are being made so that both in Ukraine and when they flee to neighboring EU countries, women victims of abuse have access to necessary medical care, for example emergency contraceptive pills, psychological assistance and other care.

For this reason, Johansson has assured that everything possible will be done to support the women and that “no stone will be left unturned” to find the guilty so that they can be judged.

In this sense, the commissioner explained that the powers of the European Agency for Criminal Justice (Eurojust) have been strengthened so that it can collect evidence to help prosecute the perpetrators of abuses and has encouraged the Member States to increase aid that it is already sending to Ukraine to improve the means of collecting evidence, for example by sending forensic experts.

“All war crimes must be brought to justice, including rape,” stressed Johansson, who acknowledged that at the moment it is difficult to establish how many sexual victims there are in Ukraine due to the invasion led by Vladimir Putin because many of them are still they are afraid to speak.

Read:  Ukraine says Kherson region is on the verge of a humanitarian catastrophe due to Russian offensive

The plenary session of the European Parliament meeting in Strasbourg (France) has joined the concern about sexual violence and exploitation of which women and minors are victims in Ukraine and has demanded that refugee reception centers must be adapted to meet their needs. specific needs and have mechanisms to collect their complaints in accessible languages ​​and formats.

It also calls on the EU and transit and host countries to ensure that refugee women can access sexual and reproductive health services, in particular emergency contraception and abortion, including for rape victims, as well as gynecological care.

For those women who are still in Ukraine, MEPs advocate allocating EU means and funds to guarantee their rights to sexual and reproductive health, for example by sending hygiene and sexual health kits in convoys and humanitarian packages, with contraceptives among the products.

To facilitate the integration of refugee women in host countries, the resolution proposes allowing their access to the labor market as soon as possible, as well as providing them with language courses and childcare services.