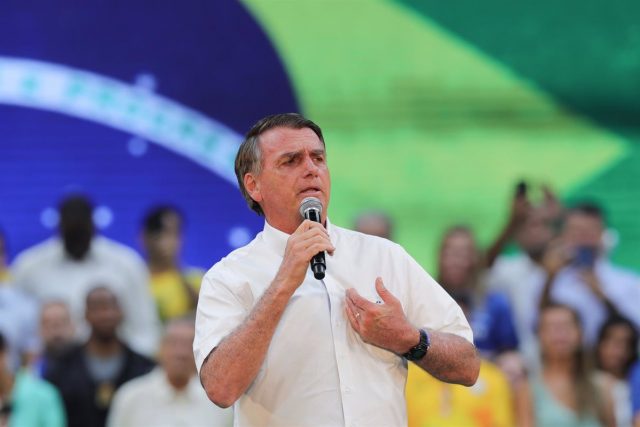 Brazil’s president, Jair Bolsonaro, has inaugurated this Tuesday the campaign for the October elections from the city where he was stabbed in September 2018, Juiz de Fora, and with a battery of ultraconservative messages in which he anticipates the fight at the polls “of good against evil.”

Bolsonaro believes that it is time to “be vigilant”, because in campaign “those who have persecuted and defended the closing of churches will consider themselves great Christians” and “those who praise socialist dictatorships will call themselves defenders of democracy.”

The president has said on Twitter that he does not deceive, that he is “in favor of the family, the free market and the right to self-defense” and “against drugs and narco-trafficking, media and Internet control, gender ideology and abortion.”

Read:  Russia confirms having seized the Chernobyl plant and says that radiation is at normal levels

Under these premises, and surrounded by numerous supporters, Bolsonaro has emphasized his conservative agenda in several public acts in which he has pointed out that “the country does not want more corruption” and has promised “an effort” to contain inflation and, especially, the rise in fuel prices.

In relation to the COVID-19 pandemic, the president remains far from self-criticism and has defended that he was not wrong in his strategy, based on zero social restrictions. In fact, he has suggested that there was “a bit of dictatorship” during the health emergency, “with churches closed and people unable to go to work,” according to local media.

Read:  More than 20 killed in attack on mosque in northwestern Afghanistan

The president is behind in the polls against former president Luiz Inácio Lula da Silva, which is why he would have given more prominence at the start of the campaign to the first lady, Michelle Bolsonaro, in search of the women’s vote.

In the latest survey by the consulting firm Ipec, Lula would win in the first round with 44 percent of the votes, well ahead of the 32 percent that Bolsonaro would achieve, who follows Bolsonaro strongly among older men, the evangelical sector and higher incomes.