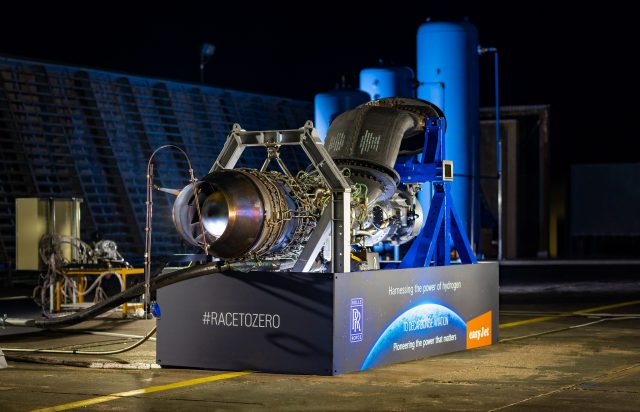 Rolls-Royce and easyJet have successfully tested the first hydrogen-powered turboprop.

Adoption of these engines could significantly reduce the aviation industry’s carbon dioxide emissions, which account for about 2.1% of total global human emissions.

It’s hard to produce eco planes because electric models are hard to develop and have short range. That’s why hydrogen is considered the fuel of the future in this field.

The hydrogen-powered turbojet has been tested at ground level, according to a Rolls-Royce release. When this gas is burned in the atmosphere, water vapour is released instead of carbon dioxide. But for now, producing the fuel on a large scale is the opposite of a polluting activity. New technologies, such as hydrogen-producing solar panels, could be a solution to this problem.

The two companies converted a Rolls-Royce AE 2100-A aircraft engine into a hydrogen turboprop. Tests were carried out in the UK and the fuel was produced by the European Marine Energy Centre in Orkney Islands. Because it was made using energy from wind and wave turbines, it is considered green hydrogen.

Unfortunately, however, the amount of green hydrogen available at the moment is small because production costs are so high. Fortunately, the Biden administration has begun investing heavily in the production of this fuel.

Most of the hydrogen supplies available today were produced by burning natural gas, an activity that massively pollutes the air.

In order to use hydrogen, planes will have to incorporate larger tanks, according to the Air Transport Association. For example, a Boeing 747 would need 1 million litres of hydrogen to cover the same distance it would cover with 250,000 litres of kerosene.

That’s why green hydrogen will initially be used for short flights. Hydrogen-powered planes with a range of up to 3,000 km will not appear until 2035, according to a study commissioned by the EU.

For easyJet the situation is not complicated, as it mostly covers short routes. For Rolls-Royce, which makes engines for 400 customers, the new engine is a huge step forward.