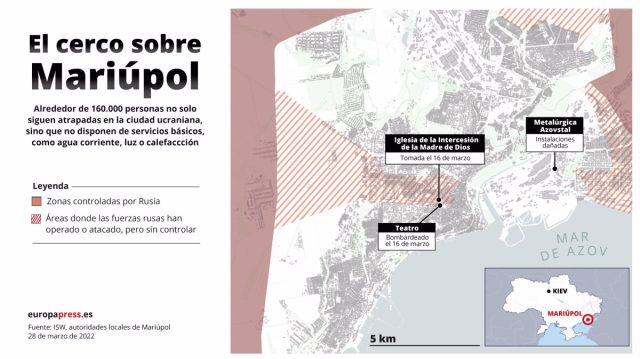 Map showing Russian controlled areas in the Ukrainian city of Mariupol as of March 28, 2022 – Europe Press

The mayor of Mariúpol, Vadim Boichenko, has warned this Monday that around 160,000 people are not only still trapped in the city, but also do not have basic services, such as running water, electricity or heating.

In Mariupol, “today it is impossible to live because there is nothing,” Boichenko denounced in a televised speech echoed by the Ukrinform news agency. “Unfortunately, there are still quite a few people in this city on lockdown. Around 160,000, according to our estimates.”

“It’s really terrifying. The humiliation that each resident of Mariupol is suffering at the expense of the Russian occupation is impossible to define,” said Boichenko, who has stressed the need to continue denouncing this situation so that the people who are still trapped do not fall into oblivion.

“We live with this hope,” said Boichenko, who in turn lamented that “under fire” it is very difficult to carry out the evacuation task. “Not everything is in our hands, unfortunately today we are in the hands of the occupiers,” he acknowledged.

That is why it has appealed, as other Ukrainian authorities have been doing since the Russian invasion, to its “international partners” so that, in this case, they also collaborate in the rescue and evacuation of those who have been left behind.

Read:  Boric admits that there are "things he doesn't like" about the Constitutional Convention but highlights his work

“Like tens of thousands of Mariupol residents, I hope with hope that such a decision will be possible. We look forward to our international partners, for their steadfastness, for their beliefs, for their words of love. We cannot let go of this hope,” he said. Mayor.

“We are very hopeful that France and Turkey will come together and open a stable ‘green corridor’ for us, and bring back those people who want to return to controlled territory of Ukraine,” Boichenko said.

The mayor has also offered a final balance of the number of victims that have been registered in the city since the beginning of the Russian invasion, putting the number of deceased people at almost 5,000, among whom there are 210 minors.

“During 27 days of siege and until March 27, almost 5,000 people have died in Mariúpol, including about 210 children,” the mayor said in a statement, collected by the Ukrinform agency.

Boichenko has assured that 90 percent of the apartment buildings that have been hit by Russian projectiles, of which 40 percent are totally destroyed, as well as a dozen hospitals, and fifty schools and nurseries.

For her part, the attorney general, Irina Venediktova, pointed out at a press conference that the actions of the Russian troops in Mariupol could be described as “genocide”, after the entire city has become a “hostage” of Moscow, unable to access basic services.

Read:  Sweden denounces an incursion into its airspace by a Russian plane

“What is happening in Mariupol is no longer a war crime. War has rules, but there are no rules here,” explained Venediktova, who does not rule out the possibility of defining what is happening “in terms of genocide,” reports the Ukrainian news agency Unian.

“The whole city is hostage, people are without water, without food, without heating. There is no possibility of leaving, those who try to leave are shot at,” denounced the prosecutor, who has directly accused the Russian Foreign Minister, Sergei Lavrov, for “pointing out” the maternity hospital that was attacked in the early stages of the war.

The prosecutor assures that “more than 2,000 children have been deported from Mariupol” by the Russian authorities as part of President Vladimir Putin’s plan to “destroy” the country. “Let’s not fool ourselves (…), there have been other deportations,” she said, mentioning the Holodomor, the great famine of 1932.

“What is all this about? Is it just a war crime? It is much more than a war crime. There is the possibility of qualifying it as genocide, because as a citizen I perfectly understand what is happening to our people,” he said. Venediktova.