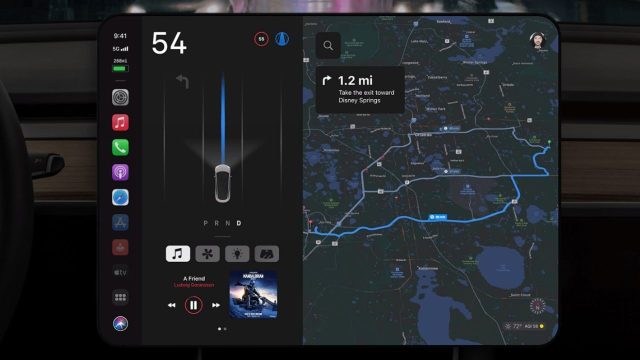 One screen to control everything.

The Apple Electric Car project is underway and it is rumored that the vehicle could use a Tesla-inspired carOS platform, which runs on a dashboard similar to the one you would find on the Model 3.

Taiwan’s DigiTimes reports that the Cupertino giant is currently developing a custom version. Software platform capable of controlling all driving and infotainment functions, whether it’s starting the car or just playing a song through Apple Music.

The same report also mentions a domain control unit (DCU) for Apple Car, which apparently handles all the necessary data processing while driving. It is said that an unnamed Korean company is working on a DCU for Apple.

Read:  The actor who gave his life for the stage: Valeria Seciu never remarried after the death of Octavian Cotescu. Their only son, a monk

If it is correct, it seems that DCU and carOS would take care of more or less everything that happens in the car. In other words, we’re talking about something that goes far beyond the features you might be accustomed to with your existing CarPlay experience – maps, music, and other audio applications.

Apple car between myth and reality

It would be a huge surprise if Apple didn’t work on its own car technology – but that’s not a guarantee that a real Apple car will ever be launched.

Apple chief Tim Cook was vague about the company’s plans for vehicle development, but suggested that Apple is looking at self-driving software, if not a real physical car that you can drive.

Read:  Driven by poverty, he was a miner, a porter and a driver. Ilarion Ciobanu, the great actor who lived dozens of lives in one go

We’ve seen Apple launch events come and go without mentioning an Apple machine and it would clearly be a major move by Apple, especially since we’re talking about an area where it doesn’t have much experience.

Making cars is not easy, as Tesla has learned, but if any company has the resources and know-how to make them, it will be Apple. I’m still not sure if an Apple car will ever be launched, but if it does, it could be as significant as launching the first iPhone.