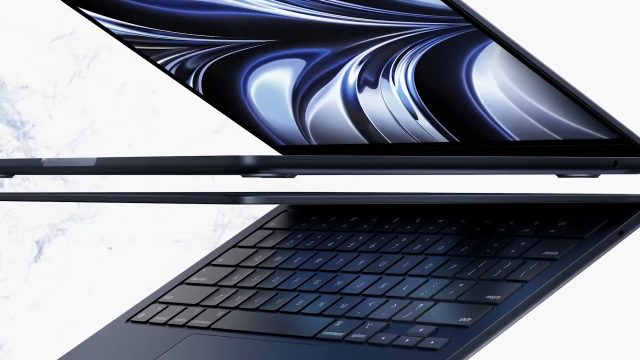 Even though we expected Apple to announce a new Mac Mini with M2 processor, the company surprised us and announced two MacBook laptops. They do integrate the new M2 processor, but it seems to be a smaller leap in performance than we expected before. That’s because the new Apple processor remains on the 5nm architecture, but from a newer generation. The MacBook Air receives a new design, inspired by that of the new MacBook Pro models, while the 13 ”MacBook Pro remains the same design we have known since 2016.

M2 is a “standard” upgrade, with improved performance in places

The M2 processor was probably the surprise of the evening, as we were only expecting software ads, not mandatory hardware ads. However, Apple decided to bring the M2 processor to market a year and a half after the start of the first generation, in the fall of 2020. Apple tried to go in the same direction it started almost two years ago, offering high performance with a low power consumption with the new processor. Apple M2 integrates 25% more transistors than the M1 model (20 billion) and comes with faster memory, with bandwidth of 100 GB / s (50% improvement over M1). Even the amount of RAM increases from 16 to 24 GB in total. What does not increase is the number of nuclei. We also have 4 high-performance and 4 efficient cores, with performance improvements. Apple says that the performance on the CPU is 18% higher than on the M1. On the GPU side, we get up to 10 cores, from 8 on M1, with about 35% better performance. An important upgrade was also received by the M2 neural processor, which allows 15.9 trillion AI operations per second, a 40% performance jump. This processor also includes a new Media Engine, for real-time video processing for 8K, 4K or professional editing videos.

The first computer model to be introduced with the M2 processor is the MacBook Air, a new variant that follows the design lines we saw in the fall on the 14 and 16 ”MacBook Pro models. It retains the previous generation’s two Thunderbolt Air ports and headphone jack, but also gets a MagSafe magnetic charging port. However, it does not receive a cooler, the MacBook Air being again a “fanless” model, completely silent.

In profile, the computer is now just as thin from head to tail, where it used to be more triangular in shape. It will be delivered in four colors (Silver, Space Gray, Starlight and Midnight) and comes with a notch screen, just like the Pro models. The Air model now has a slightly larger 13.6 ”screen and includes the new 1080p camera with Center Stage and image processing. The keyboard now has normal-sized square buttons at the top and retains the TouchID fingerprint sensor.

However, the screen is improved, being delivered with thinner edges, 10-bit colors and 25% higher brightness at 500 nits. The sound system is also better, with four high-performance speakers located above the keyboard, compatible with Apple’s space sound technology. There are also 3 built-in microphones for better audio calls. The laptop comes with a 30W charger in the base version and a 35W charger in the top, which can power two devices simultaneously, but there is also the possibility to use a 67W charger for fast charging (57% in 30 minutes). It is bought separately. At full charge, Apple says you can get up to 18 hours of video playback on this model, which measures just 11.3mm thick and weighs 1.24 kg. By far the strangest announcement today was the 13 ”MacBook Pro, which does not seem to disappear from the offer. Although the MacBook Pro 14 already exists, Apple keeps this model as a cheaper alternative. It has the same case as before, including the Touch Bar, which has disappeared from all other remaining MacBook models. The difference from Air in terms of configuration is the lack of a basic processor model, which starts from 8 CPU cores and 10 GPUs from the start. The screen has no notch, but has thick edges around it, and includes a cooler, which allows higher performance than Air. It also has a more powerful battery, which provides 20 hours of video playback. This model starts at $ 1,299 in the US, ie 1,599 euros in Europe (8 GB RAM + 256 GB storage). But what it doesn’t get is the new Full HD camera, available on the cheaper Air model. Both models will be available for sale starting in July. Apple deducts $ 100 / euro from the prices of its laptops for students and teachers, based on the cards issued by the school.