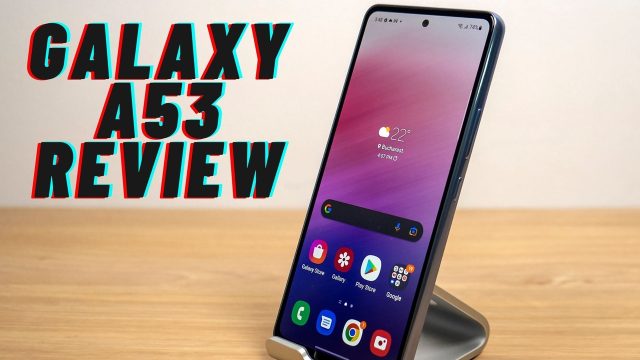 If something isn’t broken, it doesn’t need to be repaired, and Samsung’s Galaxy A series manages to be the most successful in the company’s portfolio every year. Thus, the new Galaxy A53 5G does not seem to be a major upgrade over last year’s model, but it offers a list of improved capabilities in some places, and provides a familiar and quality user experience for those with a budget of about 1700 lei for a new smartphone.

Galaxy A53 has a familiar design

At the design level, very little has changed since last year. If I hadn’t already known, I could have said we were dealing with the same phone. The Galaxy A53 is still a predominantly plastic phone with a matte back cover, which also incorporates a camera island, a plastic frame and a Gorilla Glass 5 screen. However, the phone is not very light, despite the materials. used, but it is far from the heaviest models on the market, at 189 grams. The only thing I didn’t like about the Galaxy A53, as with the A52 and even the Galaxy S FE, is that the plastic on the back is too thin. In some parts, if you tap your finger lightly, because of the thin cover, you will feel that it is empty on the inside. At least the matte finish ensures that it will not attract fingerprints, regardless of the color chosen. And despite the use of plastic almost everywhere, the case is also water and dust resistant to the IP67 standard, something we don’t usually find on such cheap phones.

A cover would be recommended to make sure nothing happens in the event of an accident, but it is not included in the package. In fact, nothing is included with the Galaxy A53, as Samsung does not even offer a charger or screen foil on this model. The only accessory is the USB-C power cord at both ends. This means that if you have a Galaxy A from an older generation, you will have to buy a new USB-C socket adapter. I wasn’t expecting a premium build from a mid-range phone, but I was pleasantly surprised by the Galaxy A53’s screen. It uses a 6.5 ”Super AMOLED panel diagonally, with very good brightness at 800 nits and refresh rate at 120 Hz. Basically, this screen is comparable to the flagship models of other manufacturers. Of course, from the factory it is configured on a vibrant profile, with supersaturated colors, but you can manually move it to the Natural profile. The performance is disappointing, offering about half that of a flagship

What did not impress me, however, is the raw processing performance, which, surprisingly, is also seen in use. Galaxy A53 uses a Samsung Exynos 1280 chipset, a modern mid-range octa-core model, made on 5nm architecture. While the power consumption is low, the performance offered is quite limited. I would have expected performance comparable to what I received on flagships 2-3 years ago, but this is not the case.

The user experience is good, if you haven’t used a top phone from recent generations so far, but even in the menus I noticed certain moments when the interface did not move with the necessary fluency for the 120 Hz screen. Also, the optical fingerprint sensor built into the screen seemed a bit slow, but at least it unlocked the phone every time, without too many errors. In the performance tests, the scores are about half in all categories compared to the models in the S22 range from Samsung. But I was expecting something more, given that other competing phones use better Qualcomm solutions in this price range. Sure, this model will do its job in most applications, especially social media, or games, but it could “age” a little faster over time than other current solutions.

Galaxy A53 offers very good battery life, thanks to the large battery

However, Samsung could have an advantage over other average devices on the market with a battery on the Galaxy A53. The phone uses a 5,000 mAh battery, which can be quickly charged to 25W. Charging power is not impressive, but the 5,000 mAh can provide two days of use on a single charge, even with the screen set to 120 Hz. You can extend the autonomy by limiting the refresh rate, or by decreasing the brightness.

Samsung is the leader in software support in the Android market

But there are a few chapters in which Samsung still has no rival in this price area. First of all, we are dealing with extended software support. Galaxy A53 comes with Android 12 and One UI 4.1, ie the same software version that we find on the high-end S22 models, recently launched. The interface is the same, the functions are the same, and the software support is similar. Four years of system updates and five years of security updates put the Galaxy A53 higher in the list of phones with extended support and than the Pixel models from Google. The only thing that bothers me about the Samsung software is that at the first configuration you do not have the option to choose the desired navigation mode, being set by default the one with the classic buttons. In 2022, gestures should be standard. Then we have the audio component, which, surprisingly, does not fall into the trap of mid-range models. The speakerphone is amplified to provide stereo playback with the speakerphone below, and the sound quality is above average. Apart from the lack of bass, and the volume is not very high, even at maximum, the music sounds very good, and the speakers do not distort. Those who will use headphones for music will have to choose a pair of wireless or USB-C jack, as the Galaxy A53 no longer includes a headphone jack.

The Galaxy A53’s cameras are still average, but the results are good

Galaxy A53 comes with a system with four photo sensors on the back, of which most users will use only two. We have a 64 megapixel wide optical stabilization main camera, a 12 megapixel ultrawide camera, and 5 megapixel macro and depth cameras each. I have to say from the beginning that none of the cameras on the Galaxy A53 shine, not even in the mid-range area. These are just decent, average rooms. What Samsung does in a very obvious way, however, is to apply an exaggerated sharpness filter, which is seen especially on the ultra-wide camera and on the hybrid zoom mode made on the main camera. On standard wide photos, this effect is minimized, but I can’t help but notice that most images are overexposed, with a limited dynamic range. However, I appreciate the fact that Samsung has made an effort to calibrate the two cameras to provide colors as close as possible. Also, in the absence of an optical zoom camera, the quality of the 2x hybrid zoom is very good.

Read:  What the new MacBook Air with M2 processor looks like. Can the Apple laptop be repaired?

At night, the photos are not very impressive, being especially affected by the image noise, but I liked the fact that the algorithm is calibrated to keep, as much as possible, the original atmosphere of the frame, without turning the night into day, as is the case with other phones. However, I recommend using only the main camera at night, as the results on ultrawide are limited.

The macro camera on the A53 is better than other recently encountered solutions, the 5 megapixels can capture more detail, but other phones take similar photos, or even better with the ultrawide camera, from a short distance. I haven’t really understood the fascination of manufacturers for such cameras in recent years, as it doesn’t seem to be a popular shooting style among users, and the results are poor anyway. Basically, the number of rooms is only artificially increased, as is the price of the phone.

But the most “useless” room of all is the deep room. It is used, in theory, to create the portrait mode, which cuts out the subject for applying the blur filter in the background. In practice, the phone is more than capable of doing this even without a dedicated camera. Here’s the proof: this selfie in portrait mode, taken with the front camera of the phone, with excellent cutout, without a secondary camera. With only two cameras on the back, the Galaxy A53 would have had the same general capabilities in terms of photography, but could have come at a lower price.

Unfortunately, with two, three or four cameras, the Samsung camera app definitely needs an update. This is similar to the top models, but is significantly slower. Limited processor performance may be to blame here, and the launch is always delayed, but I’ve seen such issues on the S22 Ultra as well, so there’s a software limitation somewhere. Shooting fast and abruptly moving subjects, such as children or pets, will be complicated with this phone and is generally on Samsung phones, but it feels more on it.

Galaxy A53 is a phone that will surely be successful in the market, and its advantages are hard to dispute. Even though it has a rather “plastic” construction, the phone comes with water resistance, even if the processor is not very efficient, it offers a good user experience in most normal cases, and the screen, autonomy and software support are above what we find usually in this price range.

Newly launched, the A53 starts at a price of about 1,700 lei for the version with 6 GB RAM and 128 GB storage and comes without a charger, but its price will certainly decrease in the next few months. What is certain is that the A53 is an “honest” phone, which is not too pretentious, and delivers, in some respects, more than you would expect from it.