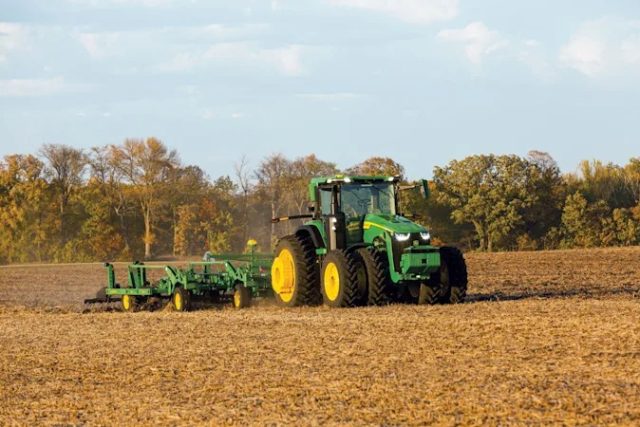 Repeating history, Russia steals thousands of tons of grain from Ukraine, as well as the agricultural machinery used to grow them. It’s just that the strategy based on robbery and destruction doesn’t quite match the reality of the 21st century, with state-of-the-art tractors being tracked by GPS and deactivated remotely. At the same time, videos distributed on social networks show convoys of trucks loaded to the brim with grain stolen from Ukrainian silos, exposing to the whole world the true strategy of the “liberators” in Russia.

Provided by the American manufacturer John Deere, the agricultural machinery with a cumulative value of approximately 5 million dollars incorporates advanced technologies that allow the owners to follow in real time the work done with them, knowing in detail on what land the agricultural work was carried out and how efficient. are their operators. Last but not least, the manufacturer of the equipment can obtain real-time data on the operating condition of each machine, intervening in advance to carry out overhauls and to remedy any technical problems before they put the equipment out of service. The system perfected by John Deere is not without controversy. For example, the owners of the equipment cannot intervene personally to repair the agricultural equipment they own, being forced to resort to the maintenance services provided by the manufacturer, at the rates charged by the manufacturer. Instead, there are other advantages, with computer equipment also incorporating systems that can act as highly effective anti-theft mechanisms.

Detected more than 1,100 km away, in Chechnya, stolen John Deere tractors from Ukraine could be deactivated remotely, most likely permanently, as Russia’s war booty became only good for scrap metal.

“When the invaders took the stolen cultivators to Chechnya, they realized that they could not even start them, because they were blocked from a distance.”

Although the equipment could be scrapped and sold for parts by Russian troops, the source said he is currently lying idle on a farm near Grozny.

Melitopol, a city in the southeast of the country near which the agricultural machinery was stolen, has been under Russian occupation since early March. According to sources, the Russian military also robbed a museum in the city, stealing gold artifacts and up to 2,000 paintings and artifacts.

Read:  YouTube Music will no longer use exact location to generate play recommendations