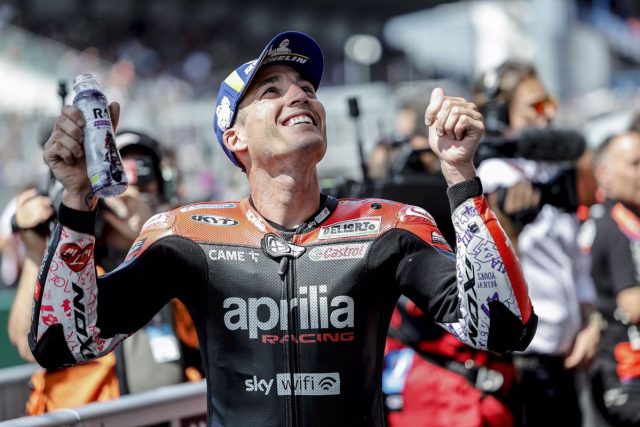 ‘Triplet’ of Spaniards in making contact with the Catalan GP

Spanish riders Aleix Espargaró (Aprilia) in MotoGP, Arón Canet (Kalex) in Moto2 and Izan Guevara (GasGas) in Moto3 dominated the first day of free practice for the Catalan Grand Prix, held this Friday at Circuit de Barcelona-Catalunya , at the start of the ninth round of the Motorcycle World Championship.

The queen category of MotoGP left an exhibition of the Spanish riders in the first training sessions. The Aprilias reigned the day, thus repeating the feat already seen in the ‘warm up’ of the last round of Mugello. Aleix Espargaró, second overall, 8 points behind the leader Fabio Quartararo (Yamaha), registered his name this Friday as the fastest in Montmeló.

The eldest of the Espargarós flew in the second round of the Catalan track in front of his fans -he’s from Granollers, next to the Circuit– to get the best time and continue as ‘sweet’ with Aprilia, with a time of 1:39: 402 with which he deprived his teammate Maverick Viñales of winning the best time by two tenths.

Read:  Canada refuses to play a friendly against Panama as a protest against the Federation

The Ducati also left a good feeling in the first session. The best motorcycle of the Italian brand was that of the satellite team of the Italian Enea Bastianini, who finished ahead of Francesco Bagnaia, with the factory Ducati, and Jorge Martín, closing the ‘Top 5’ despite suffering a new fall in the morning session.

The return to action in Catalunya was essential for Álex Rins, who led the morning session. However, the Catalan finished the day in eighth position as he was one of the three drivers who did not improve his own time in FP2, the second round of free practice.

Things were worse for Yamaha, which closed the ‘Top 10’ with its two riders. In the case of the leader of the World Championship, Fabio Quartararo, he had to settle for ninth position, followed by his teammate Franco Morbidelli, who overtook the Hondas of Pol Espargaró and the Japanese Takaaki Nakagami by thousandths of a second, again far ahead and throwing least to the recently operated on the shoulder, for the fourth time, Marc Márquez.

IZAN GUEVARA LEADS IN MOTO2 AND ARÓN CANET, IN MOTO3

In Moto3, the Spaniard Izan Guevara (Valresa GASGAS Aspar Team), second in the championship, led the first contact with the Circuit after commanding the two sessions held. His time of 1:48.675 allowed him to beat fellow Spaniard Daniel Holgado (Red Bull KTM Ajo) by two thousandths, who finished ahead of Italian Dennis Foggia (Leopard Racing), winner at Mugello (Italy).

Finally, in the Moto2 category, the Spaniard Arón Canet (Kalex) led the day on Friday, with a time of 1:44:450, ahead of his compatriot Augusto Fernández (Red Bull KTM Ajo) and Jake Dixon (Inde GASGAS Aspar Team), in charge of closing the provisional ‘Top 3’ after these first two free sessions in Montmeló.