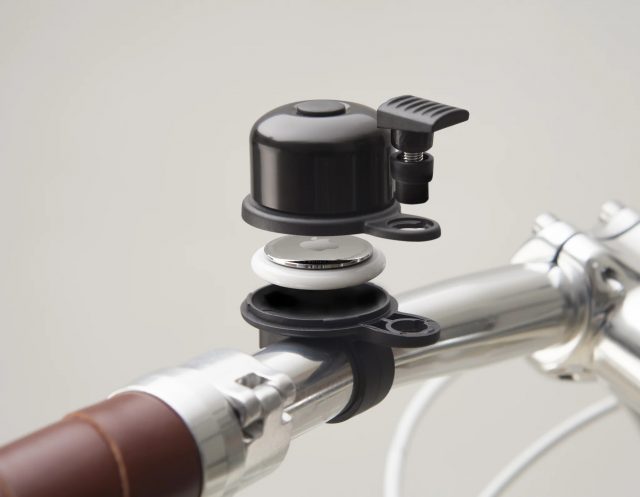 Bicycle theft is pretty common pretty much everywhere in the world, and over the years all sorts of more or less effective anti-theft solutions have emerged. While most solutions try to anchor the bike as well as possible to the place where it is left, very few solutions try to help recover the bike once it has been stolen. The AirBell, however, is an elegant solution to this problem, being a simple handlebar bell that can house an Apple AirTag, which can then be easily tracked via the Find My app.

The AirBell looks no different from a regular bicycle bell horn, which will make it not stand out quickly when a bike thief chooses to steal a bike off the street. Thus, chances are good that he will completely ignore the bell and leave it in place after fleeing the scene. But the compartment under the bell is specially designed to house an AirTag-like device, so the thief could report the position of the bike himself at all times.

That’s because the AirTag works by connecting to other Apple devices around it, be they phones, laptops or tablets. These devices report their GPS coordinates to each other even when they’re disconnected from the internet or turned off. So if the thief has an iPhone, or if he passes someone with an iPhone or any other Apple device, the bike will constantly report its position.

How you get back into possession of the bike, however, is another discussion. Ideally, you should always call the authorities and report the situation to them, along with the GPS coordinates reported by the Find My app. Approaching thieves directly, without the help of the authorities, could put you in a dangerous situation.

Read:  Samsung patents a smartphone with a transparent screen

According to The Verge, who also tested the AirBell, the only problem with the AirBell would be the thickness of the handlebars it can be mounted on. The standard one is compatible with 22mm handlebars, while a newer version offers compatibility up to 31.8mm. The price is €25 for the AirBell, and you have to buy the AirTag separately.