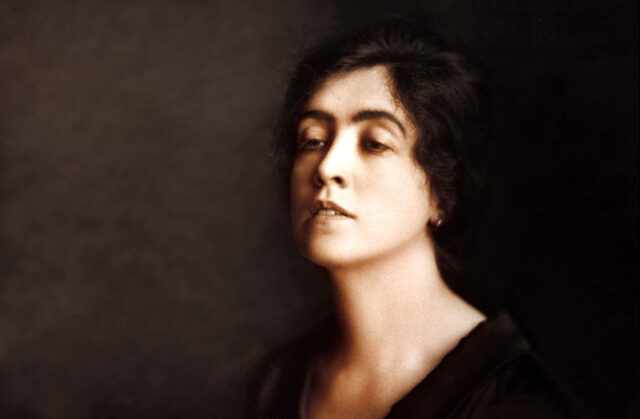 Today, few people still know who Cella Delavrancea was and why she is relevant to Romanian art, and this is sad in context but not necessarily rare.

She had an irrevocable influence on music, with a style all of her own, but a host of “urban legends” were born around her, each one more difficult to believe.

“Imagine, darling, that I’m skipping 70 and she’s not even 35! I hope I don’t end up like old Caragiale with Cella Delavrancea and die of Calache’s disease, he-he!”, Alexandru Piru, professor of Philology, once said, according to commentator.ro.

Cella Delavrancea was blessed with a special DNA

Maria Cella Delavrancea-Lahovary, by her full name, was born on 15 December 1887 and distinguished herself throughout her career as a pianist, teacher and writer, the latter talent inherited, it seems, from her father, the illustrious writer Barbu Ștefănescu Delavrancea.

Moreover, she was the sister of Henrieta Delavrancea, a highly appreciated architect at the time, and of Bebs Delavrancea, a member of the Eugen Lovinescu cenacle.

She was a close friend of Queen Mary of Romania, which obviously opened new doors in society for her, if such a thing was still needed. From a sentimental point of view, Cella Delavrancea also had a rather full life.

During the First World War, she was married to Viorel Virgil Tilea. Soon after her divorce from him, she married Aristide Blank. This marriage was not destined to last either, so Delavrancea linked her destiny for a third time, this time marrying Philippe Lahovary, whom she chose to keep her name.

She studied the piano, and later attended the Conservatory in Bucharest and a training course in Paris.

As a pianist, she performed on numerous stages in Europe, often even performing in duets with the great George Enescu. At the same time, she was to make her literary debut in the magazine owned by Tudor Arghezi.

As a child, the destiny of Celle Delavrancea’s family seemed to go hand in hand with that of Ion Luca Caragiale’s family. She grew up with the sons of “Nenea Iancu”, and he was to mention her many times in his memoirs.

“A child prodigy, Cella Delavrancea, taming a wild monster: Art”, wrote Ion Luca Caragiale, in the publication Universul, on 4 May 1909.

Caragiale is said to have been in love with her, and “Aghiuță” was by her side on her deathbed

There is no doubt that Cella Delavrancea was a special character, and in many ways.

Read:  Minions: The Rise of Gru proves it's still possible: the recent hit that shows you why cinema isn't "dead"

She was the first Romanian artist to participate in her own centenary, in 1987, where she performed with pianist Dan Grigore.

Moreover, beyond what she left behind, from a cultural point of view, Cella Delavrancea is often remembered for the “spicy” details of her personal life.

For a long time, she was associated with her relationship with Nae Ionescu, philosopher, logician, journalist and profound anti-Semite.

Moreover, as mentioned above, Cella Delavrancea was in an extremely close relationship with Ion Luca Caragiale, enjoying him even to the last moments of his life.

Evidently, several rumors about an alleged relationship between the two were, at the time, making the press’ delight. The writer often used to refer to her as “Aghiuță”.

Cella Delavrancea lived to be 104 years old and, in all those years, she amazed Caragiale and would manage to steal his heart. It happened when she was 25 and he was 60.

Moreover, she would have known him intimately including the great Austrian poet Rainer Maria Rilke, who in turn would have fallen in love with her.

Last but not least, she had the same opportunity with Constantin Brâncuși, and testimonies show that the two would not have remained indifferent to each other.