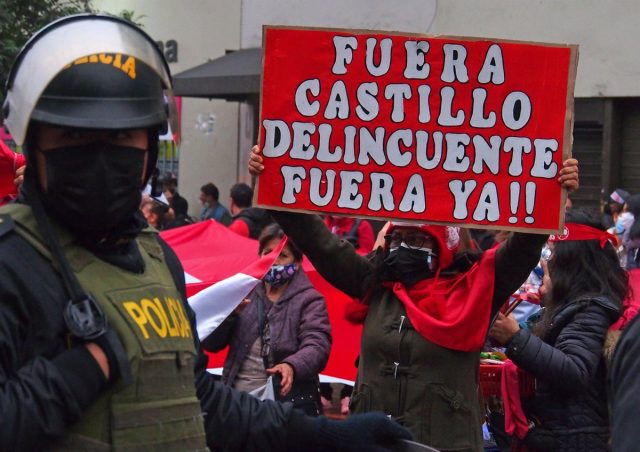 Eighty-five percent of Peruvians polled in the latest survey by the Institute of Peruvian Studies (IEP), published Sunday, disapprove of the management of Congress, while 67 percent do not endorse that of the country’s president, Pedro Castillo.

The survey, which was conducted between August 1 and 4 by 1,208 people, reflects however a small increase in his acceptance from June to August from 19 to 24 percent. In addition, the president’s disapproval in June was 71 percent, which has dropped four points, reported RPP radio station.

Pedro Castillo’s approval reaches 19 percent among the country’s high and middle incomes. In terms of geographical division, the Peruvian president receives more support in the south (33 percent) and in the east (28 percent), while his disapproval is higher in the north and center of the country, where it reaches 67 and 73 percent, respectively.

As for the role of Peru’s Congress, 75 percent of respondents disapprove of its performance at the time of the first year of the legislature. Only 21 percent responded that they approve of the work of Parliament.

The work of the president of Congress, María del Carmen Alva is disapproved by 61 percent of those interviewed, according to ‘La República’.

Among the reasons for disapproving the work of the Parliament, 35 percent believe that “they are not interested in the people, they only think about themselves”. Another 28 percent think that there is a lack of qualified people, while 21 percent bet because they do not let the Executive govern.

Read:  Death toll from attack on TV tower in Rivne rises to 19

The reason for not allowing Castillo to leave the country -every time the Peruvian president leaves the country, the Congress must approve it– is that the president has five open investigations by the Peruvian Prosecutor’s Office in which he is accused of crimes of corruption, personal concealment or obstruction of Justice.