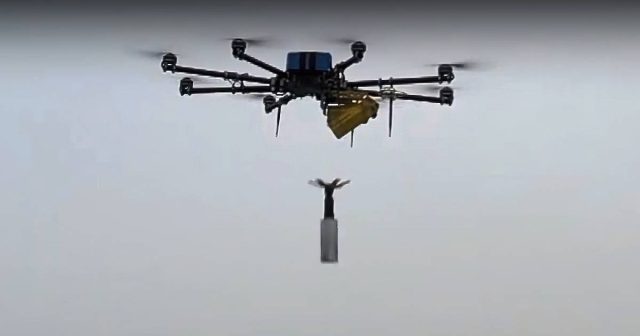 Civilian drones are successfully used by Ukrainians against Russian invaders. The aircraft are not only used for artillery reconnaissance and targeting, but also as mini Su-25s in ground attack missions.

Ukrainians have developed all sorts of systems by which drones, such as DJI models, launch bombs and grenades against enemies. If at first these mechanisms were quite rudimentary, now they have been refined.

In a video posted on social networks we see how a hand grenade launcher was made with the help of a 3D printer.

The grenade is removed from the nail / pin and is then inserted into a “bomb” made of transparent material, which, when closed, holds the lever / spoon pressed. When it hits the ground or an object, the container opens, the lever is released, and the grenade is armed. After a few seconds it explodes.

The system developed with the help of 3D printers uses Soviet RGD-5 grenades. They are abundant in Ukrainian stocks.

Drones are also used successfully against armored vehicles. Models with high transport capacity, domestically produced, have been modified to carry RKG-1600 anti-tank grenades. For better accuracy, plastic fins have been made for grenades, also with the help of 3D printers.

The use of civilian models in military conflict is not to the liking of Chinese manufacturer DJI. The company said it was suspending drone sales to Russia and Ukraine after both sides turned them into weapons.

Read:  Microsoft Edge has overtaken Safari, becoming the second most popular web browser in the world, on the PC platform

Along with civilian drones, military drones also make a significant contribution to the battlefield. Models such as the Bayraktar-TB2 and Switchblade are already famous, and the British T150 drone, produced by Malloy Aeronautics, quickly carries ammunition and supplies where it is needed on the front. The model can carry a maximum weight of 68 kilograms at a distance of 70 km.