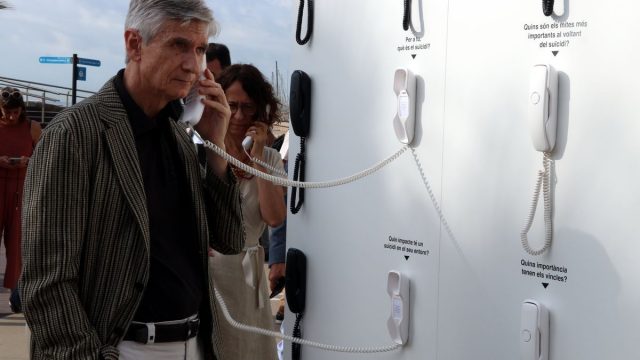 The specialized coordination table in mental health of Catalonia for high suicide risk cases of the telephone service 061 Salut Respon has attended 1,716 cases since its launch on June 20 through August 30 of this year.

This has been explained this Wednesday by the ‘consellert de Salut de la Generalitat, Josep Maria Argimon, at a press conference at the Palau Robert where they presented a new campaign to publicize this telephone service.

In total 061 has received 2,336 consultations, of which 1,716 were handled by the desk with an average duration of 30 minutes: 43% of the calls were handled during night hours and 61% were women.

The new campaign is addressed to society as a whole, but directly interpellates those at-risk groups and their families to make the suicide hotline more visible and “try to reduce the social stigma”, explained the conseller.

The main message of the campaign reads: ‘Suicide is prevented by talking. If you have suicidal thoughts or know someone at risk, call the 061 health care hotline’.

In addition, it is accompanied by thoughts that a person with suicidal behavior may have. such as ‘What happens to me has no solution’, ‘Living does not make me illusion’ and ‘Without me you would be better off’ because in the opinion of the conseller does not have to be “paternalistic” and tell the truth.

Thus, from next Monday he will start this campaign through the written press, television, radio, social networks and web pages. as well as on public transportation and street bus shelters.

Read:  Liquid biopsy will make it possible to chronify cancer and the most benefited will be lung cancer

At the beginning of September, the department led by Argimon launched a immersive experience as part of a campaign to raise awareness of the 061 suicide hotline, with the aim of making suicide visible and destigmatizing it.

The director general of Health Planning, Aina Plaza, has assured that the Suicide Prevention Plan (Plapresc) that they have developed is “very ambitious” with the aim of reducing mortality and has stated that it cannot be achieved solely from health.

He considers that it must be approached from different areas of society such as justice, work, education, housing, sport and culture, among others, with the aim of responding to and preventing suicide: “It challenges us all”.