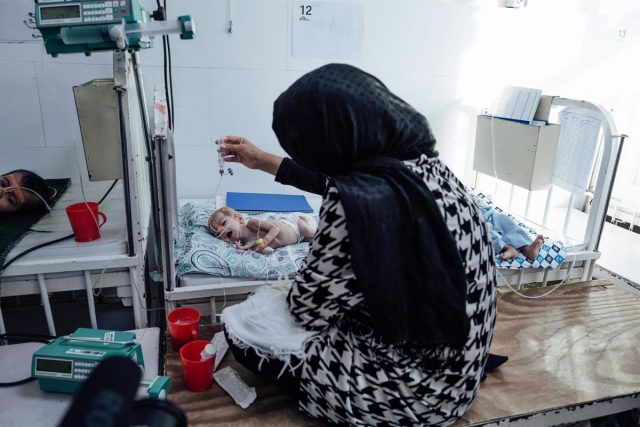 Tens of thousands of children have been born in Afghanistan since the Taliban returned to power a year ago. Humanitarian organizations fear that, without help, many of these minors will not survive their early years, a stage that is also key to medium- and long-term physical and cognitive development.

The International Committee of the Red Cross (ICRC) estimates that 113,500 babies have been born since January in the 33 hospitals it has been working with since November 2021 alone. “How many will survive?” asks the organization’s Asia-Pacific director, Christine Cipolla, who warns of health and social collapse in a country where more than half the population is in need of humanitarian aid.

The UN estimates that nearly 20 million people are food insecure, threatening the survival and development of children. A World Vision survey released Friday reveals that 53 percent of children are severely malnourished.

Not surprisingly, in the regions examined by this NGO, the average income per household does not even reach a dollar a day and remains at 0.95 cents. World Vision’s director in Afghanistan, Asuntha Charles, warns that this leads to “devastating situations” for families.

Faced with the prospect of letting their children starve to death, “they must send them to work or arrange a child marriage to ensure their survival,” Charles says. Seven out of ten boys and more than half of the girls have already exchanged school for work.

Read:  Borrell is positive about possible approval of training mission to Ukrainian Army

The ICRC head shares this fear and notes that it is becoming increasingly common in Kabul to see people selling their possessions to raise money to “put food on the table.” Drought, problems in the supply of basic commodities and rising prices add to this spiral of need.

This whole scenario has contributed to mental health problems and, according to the Wold Vision report, two out of three adults interviewed acknowledged that a minor in their care had shown signs of psychosocial distress because of what they had experienced in the last year.

Giving birth is also not easy in Afghanistan, which has one of the highest maternal mortality rates in the world, with 638 deaths per 100,000 births. According to World Vision, 64 percent of deliveries take place alone, without skilled medical assistance.

Cuts in maternal, neonatal and child health services and a reduction in skilled personnel undermine years of progress, and the NGO fears that both infant and maternal mortality will increase in the coming months and years if no action is taken.

The ICRC, for its part, stresses that there is a lack of equipment and medicines and warns that some health workers have not been paid for months. “Hospital managers, doctors and nurses in Kabul and other parts of the country are in despair,” Cipolla said in a statement.

The head of the Committee believes that the international community has “a moral and humanitarian obligation” to provide Afghans with the help they need and to alleviate a situation that she considers already today “unsustainable.” Without international assistance, she adds, “millions of children, women and men are facing immediate problems that could cost them their lives”.

From World Vision, Charles criticizes that children have been “forgotten” in recent years: “It is time for world leaders to remember these children, and ensure that they, like all children around the world, have the opportunity to play, learn, strive and have the chance to live life to the fullest.