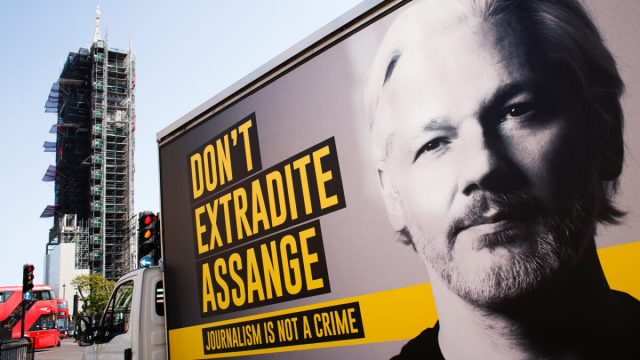 Meanwhile, crypto-currency supporters have continued to donate to Assange and his legal battle. Wikileaks has amassed hundreds of thousands of dollars in crypto assets since Assange has been held captive in London since 2019.

The United States wants Julian Assange, the founder of Wikileaks, extradited to the U.S. for disclosing classified information provided by U.S. Army intelligence analyst Chelsea Manning. When Wikileaks released the video “Collateral Murder“, classified documents from the Afghan War, the Iraq War and Cablegate, the U.S. government launched a full-scale criminal investigation against Assange. When federal authorities unveiled an indictment against Assange, the complaints stemmed from leaks provided by Manning. Assange is accused of violating the Espionage Act of 1917.

Assange joins a large number of others who have been charged under the Espionage Act of 1917, including Alexander Berkman, Emma Goldman, Daniel Ellsberg, Chelsea Manning and Edward Snowden. While Assange was granted asylum by Ecuador in 2012, seven years later, on April 11, 2019, he was deported from the Ecuadorian Embassy in London and has been fighting extradition to the United States ever since. This week, Michelle Bachelet, the UN’s human rights chief, expressed concern about Assange’s extradition to the United States.

Read:  5 ways to get rich by investing in crypto-currencies

The extradition and potential prosecution of Mr. Assange raises concerns about media freedom and a possible chilling effect on investigative journalism and whistleblower activities.

One of Assange’s lawyers, Jennifer Robinson, told reporters that the case will be referred to the European Court of Human Rights. Assange’s lawyers dispute that the Wikileaks founder is “prosecuted and punished for his political views“. Following Bachelet’s initial comments, the UN human rights chief said her office would follow up on the whistleblower’s case.

“Under these circumstances, I would like to stress the importance of guaranteeing respect for Mr. Assange’s human rights, in particular the right to a fair trial and due process in this case,” Bachelet told reporters. “My office will continue to follow Assange’s case closely.”

Read:  Apple beats Tesla as the most-shorted stock in the U.S.

Wikileaks raises hundreds of thousands of dollars in bitcoin, ethereum and bitcoin cash.

Wikileaks has supported crypto-currencies and accepted bitcoin for donations since 2010. After Assange’s arrest at the Ecuadorian embassy in London, crypto-currency donations started pouring in and have continued to this day. In the last four months alone, Wikileaks has raised 3,480 BTC worth $133,179. using today’s bitcoin exchange rates. Wikileaks BTC has changed frequently over the past few years.

The data further shows that in the past 24 months or so, Wikileaks has collected 228.16 BCH worth nearly $100,000. Over the past four years, Wikileaks has collected 147.48 ETH worth $145,647 at the current ether exchange rate. Of course, a large amount of BTC, BCH and ETH were cashed in at much higher USD values than they are worth today. In addition, Wikileaks also accepted donations in litecoin, zcash, and monero.