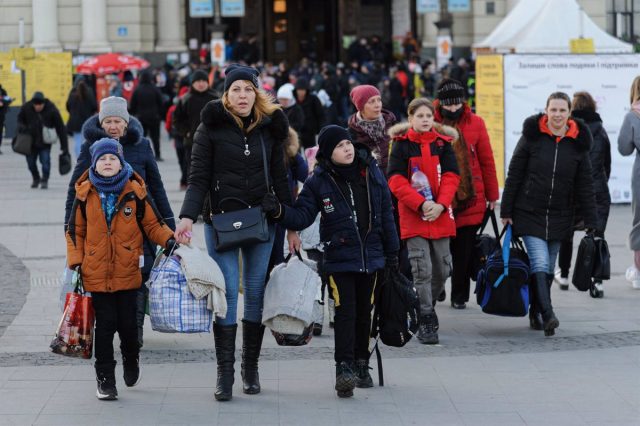 Ukraine and Russia have explained this Saturday that they have organized individual evacuations of citizens that would have removed at least 14,000 Ukrainians from the areas of direct conflict between the two countries.

For his part, the Deputy Head of the Presidency of Ukraine, Kyrylo Tymoshenko, assured this Saturday that 4,100 people had left the port city of Mariupol, besieged by Russian troops, by plane.

Likewise, at least another 2,500 people have been brought to safety from the kyiv and Lugansk regions through humanitarian corridors, as explained by Tymoshenko on his Telegram channel, where he has also announced new evacuation routes to the city of Zaporizhia for a bus convoy that would have been stopped by Russian troops, according to the Ukrinform agency.

“Nearly 500 residents of Mariupol have been transported by minibus from Manhush to Berdyansk, who will be able to leave tomorrow morning for Zaporizhia,” said the deputy head of the Ukrainian Presidency about the evacuation convoy that was stopped this Saturday on a highway three kilometers from the city of Berdyansk.

On the other hand, Russia has maintained that more than 7,000 people have been evacuated to their country in the last day from the self-proclaimed republics of Donetsk and Lugansk, as well as from other parts of Ukraine, according to the Russian agency TASS.

Read:  US Department of Defense announces more than $270 million in security assistance to Ukraine

As explained by the Russian Defense Ministry, Russia would have opened ten humanitarian corridors from the cities of kyiv, Mariupol, Chernigov, Sumy and Kharkov. Although of these ten, Ukraine would only have accepted three and would have proposed another 11 routes, according to the head of the Russian National Defense Management Center, Mikhail Mizintsev.

Russia maintains that more than 2.7 million Ukrainians are requesting an evacuation from Ukraine to Russia. “Most of the people who are forcibly detained by radicals in Ukrainian cities continue to seek possibilities of being evacuated to Russia,” Mizintsev said in a statement seen by the TASS agency.