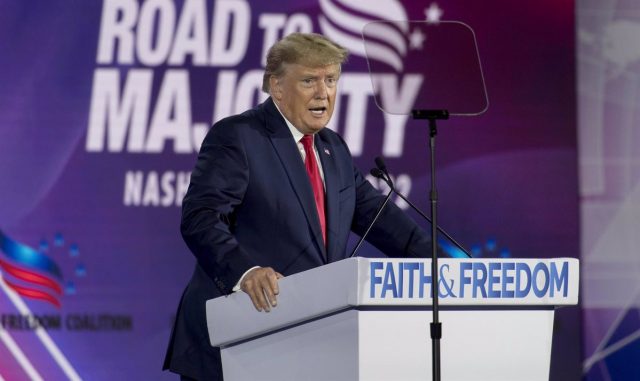 Former U.S. President Donald Trump lamented that his generals were not as loyal to him as he believes German generals were to dictator Adolf Hitler during World War II, ‘The New Yorker’ magazine reveals in a report based on a new investigative journalistic book.

Specifically, it refers to Trump’s idea of pushing a large military parade with battle tanks and other heavy equipment through the streets of Washington on the occasion of the Independence Day holidays.

The ‘number two’ of the Joint Chiefs of Staff, General Paul Selva, then replied to him that it was a bad idea, very expensive, and that “that’s what dictators do”, which unleashed Trump’s wrath.

“Do you know they tried to kill Hitler three times and almost succeeded?” argued Kelly. “No, no, no. They were absolutely loyal to him,” Trump said.

Trump also clashed with the military high command when he told them he didn’t want maimed people or wheelchairs in the parade as he had seen in Paris on a recent visit. “I don’t want them. They don’t look good to me,” he argued.

“They are the heroes,” Kelly then replied. “There is only one class of people in our society who are more heroic and they are the ones buried at Arlington,” the historic U.S. military cemetery where Kelly himself has a son buried who died in Afghanistan. Kelly was ousted at the end of 2018 and the Washington military parade was held in 2019.

Trump had already expressed his admiration for Hitler in 2018, when he said that “Hitler did a lot of good things” in economic matters, as revealed by Kelly, although a spokesman for the then-president denied the facts, calling them ‘fake news’.

Read:  Russia rejects US accusations of alleged use of Zaporiyia power plant as military base

In addition, some generals such as Army Chief of Staff Mark Milley feared that Trump would provoke a conflict with Iran after losing the November 2021 election in an attempt to stay in power. Milley even traveled to Israel to meet with Prime Minister Benjamin Netanyahu to convince him not to push Trump in that direction. “If you do, we’re going to have a fucking war,” the general asserted to Netanyahu.

‘The New Yorker’ article is drawn from a book, ‘The Divider: Trump in the White House, 2017-2021,’ written by the magazine’s reporter Susan Glasser and ‘The New York Times’ White House correspondent Peter Baker.

In response to the article, Trump has stated to ‘The New Yorker’ that “these are people with very little talent and as soon as I realized it I stopped leaning on them and started leaning on the real generals and admirals.”