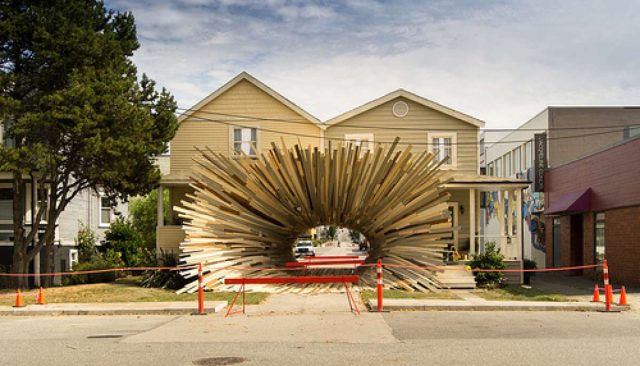 With the shape of a snail shell or with the roof down, the houses, through the skill of unprejudiced architects, can become real pearls for the places where they are built. Find out what the weirdest houses in the world are.

The strangest houses in the world

Today we discover 12 of the strangest man-made houses, which, to everyone’s amazement, are very comfortable and perfectly meet all the conditions for a decent living.

Probably the most playful house in the world is the Gingerbread House in the United States, Florida. What would a city built from such houses look like? She would probably be constantly attacked by greedy people.

These rock-built fireplaces date back to the Roman Empire. They can be found in the town of Göreme in Cappadocia, which was an important monastic center between 300 and 1200 AD.

We don’t know if this is where the famous typical Romanian wish started when a wedding takes place nearby, but we know for sure that this house deserves a leading place in the top of the strangest houses. It was built in 1974 from 4 giant boulders.

4. Cubic houses in the Netherlands

These cubic houses are located in Rotterdam and Helmond, the Netherlands. The architectural design was created by Piet Blom in 1984.

Slightly smaller than her Portuguese relative, this stone house is located in the French Alps.

This house was built in 1940 in Hazard, Kentucky. The roof is in the shape of a goose, and the windows are egg-shaped.

This house is actually a vortex installation, created by Dan Havel and Dean Ruck in the Houston Arts League. It was made of two small houses that were scheduled for demolition.

We return to the category of houses that look like a dessert with this delicious specimen. Like cake icing, this house is located in the Spanish city of Fuerteventura.

The House of Fat was created by Austrian artist Erwin Wurm and is part of a series started by the artist in 2003.

Read:  Dacia, unprecedented change: only now is it completely reinvented, what follows for the Mioveni manufacturer

10. The house upside down

The house upside down is in a country where, paradoxically, things are quite settled and in place. It is located in the Szymbark Education Center, Poland. The design was made by Daniela Czapiewski and is an artistic manifesto with reference to the communist period and its impact on the Polish community.

The Steel House is located at the top of the Ransom Canyon in Texas, and its design was made by Robert Bruno, who lives in this strange house. Construction of the house began in 1973 and since then the project has been modified and improved many times.

No, it doesn’t really melt, but that’s how it looks. The design of this house was based on paintings by JM Szancer, Per Dahlberg and Gaudi. The house was built in 2003 and is located in Sopot, a town in northern Poland.