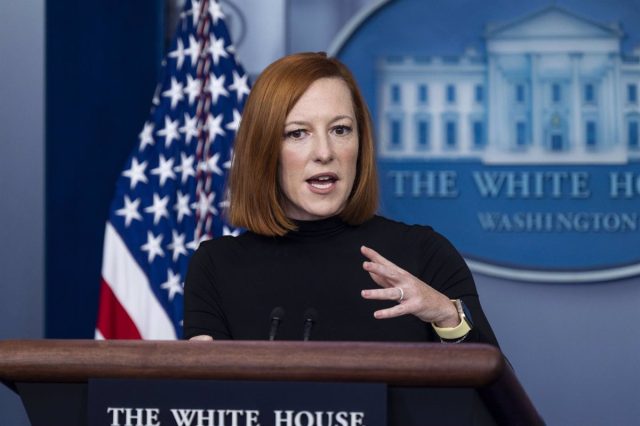 The White House has qualified the words of the President of the United States, Joe Biden, who has described the Russian actions in Ukraine as “genocide”, emphasizing that the president speaks for the country and that he does not change the US strategy, despite the fact that there is a international process to determine whether Moscow’s attacks on kyiv constitute this form of extermination.

“Putin is brutally attacking civilians and violating a country right now. The president (Biden) was talking about what those atrocities are and what he’s seeing on the ground,” said his spokeswoman, Jen Psaki, adding that, Although Biden has spoken on up to two occasions of “genocide”, there is still “a legal process” underway by which the Russian actions will be judged.

In this sense, he has clarified that Biden “is not getting ahead” of the work of the international tribunals, but is speaking “of what he feels.” Psaki has reiterated that, “regardless” of what it is called, the US goal is “to continue helping the Ukrainians in this war.”

Read:  Ukraine imposes curfew in Mikolaiv and announces two-day closure of the city

Psaki has reiterated on several occasions that “what is being seen on the ground” is proof of this, although there are “different leaders around the world (who) describe it in different ways”. “He (Biden) is the president and he is allowed to make his views known at any time he wishes,” he added.

“What is unquestionable is what we are seeing is horrible: the civilians, the hospitals, even the children. The president called it as he sees it,” he said, adding, despite this, that “a consideration of genocide requires years “.

Department spokesman Ned Price was also asked about this label, who replied that “they are working very closely” with Ukraine’s prosecutor general’s office to “launch a criminal case with a view to possible prosecutions.”

“In fact, our ambassador at large for global criminal justice will have the opportunity to speak (and) meet virtually with Ukraine’s attorney general this week to determine what else we can do to assist in that effort to collect, document, preserve, as well like sharing evidence with your office,” he said.

In this sense, Price has once again emphasized at a press conference that President Biden has spoken of his impression of the “horrible images” that “we have all seen” in places such as the cities of Mariúpol, Bucha or Kharkov.

“If this is a war crime, if this is an atrocity, if this is genocide, it doesn’t change our strategy. It doesn’t give us any additional authority to use,” he said, adding that Bide wants to “publicly draw attention” to the atrocities that are happening in Ukraine right now.

The spokesman for the Russian Presidency, Dimitri Peskov, condemned these words by Biden about the possible “genocide” in Ukraine — a term that the US administration had avoided until now — and stressed that the Russian government “categorically disagrees” .

“We consider it unacceptable to attempt such a distortion of the situation (…) this is hardly acceptable to the president of the United States,” Peskov added, noting that the North American country “has committed well-known acts in the course of modern and recent history “, collected the Russian news agency Interfax.

On the other hand, the Ukrainian president, Volodimir Zelenski, thanked the president of the United States for his words. “True words from a true leader,” he said on his official Twitter profile, adding that “calling things by his name is critical to confronting evil.”

The Biden Administration accused Putin of war crimes, but until now had not referred to his actions in Ukraine as “genocide”, a term that the Ukrainian president has used on several occasions.

“The evidence is mounting. It looks different than last week. More evidence is literally coming out of the horrible things the Russians have done in Ukraine,” Trump said, adding that “we will learn more and more about the devastation.”

In this sense, he already made it clear this week that the international courts would decide whether these actions would be classified as “genocide.” “That’s how it seems to us,” Biden reiterated in a meeting with journalists after a press conference in the state of Iowa.

This semantic escalation occurs after the Bucha massacres, where more than 400 bodies have been found, many of them handcuffed civilians, and at the Kramatorsk station, where Russian missiles killed more than 50 people.