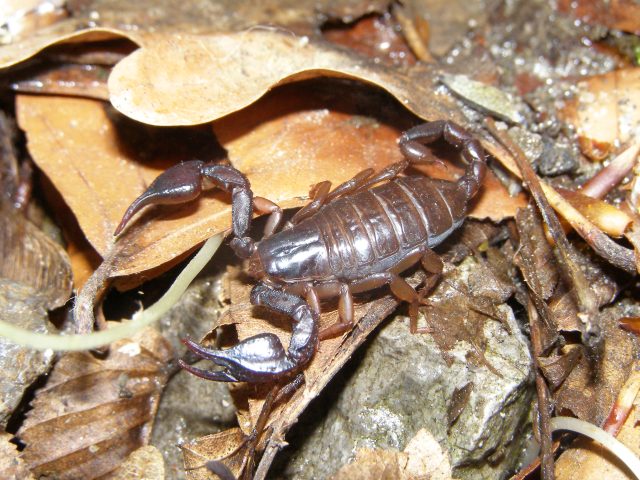 Among these animals are some of large size, which are generally found in the mountains or in dense forests, but also small. At first glance, you would say that if they are small, they are not a danger. But these copies can be fatal to you, as you can watch in the video above.

Which are the most dangerous animals in Romania

If you feel like hiking and adventure on the paths of the homeland, it would be good to set off well informed. And that includes not only the weather and the type of boots, but also a guide to the territories where some less friendly creatures live. Today we help you get an idea of ​​what fangs or venom you might encounter along the way.

The wild boar is an omnivorous wild mammal, generally nocturnal. Its range covers the whole of Europe, North Africa, including the Atlas Mountains, much of Asia, extending south to Indonesia. In Romania, the forests are populated, starting with the Danube Delta and the Meadow, up to the Carpathian thickets.

It is colored black – brown. It makes sounds very similar to those of domestic pigs. He caresses the forests and the agricultural crops at their edge. Surprisingly, it is very aggressive (especially sows with piglets) and annually injures several dozen people in our country. In the last two decades, there have been only two cases of aggression resulting in the death of the person attacked.

The brown toad is a tailless frog of the buffalo family found in wet places in orchards, forests, crops, around human settlements (in cracks in walls and in cellars). It is widespread in northwestern Africa, most of Europe and temperate Asia as far as Lake Baikal. In the Alps it climbs up to 2200 m. The brown toad is a species with several geographical subspecies.

The subspecies Bufo bufo bufo lives in Romania and the Republic of Moldova. In Romania it is found from 300 m upwards, starting with the region of the hills, to the border of the mountain forests, as well as in the Transylvanian Plateau, without exceeding 1,800 m altitude. In Dobrogea it was found only in the forested areas of the north. It is the most toxic amphibian that lives in our country, the venom (by contact) causing irritations of the mucous membranes and can even lead to death by anaphylactic shock.

The wolf (canis lupus) is a robust and slender animal, up to about 1.5 m long, to which is added a tail of up to about 0.8 m. The weight is variable, usually between 30 and 50 kg, but exceeding in some cases 70 kg. The fur is a brownish-gray color with multiple variations. Generating in the autumn in temperate areas, the wolf has a darker summer “coat” and a lighter winter coat to camouflage, making it harder to spot prey and therefore easier to hunt. . About 3,000 wolves live in our country. Experts believe that a pack of 5-6 wolves can easily kill a human being, but no fatalities have been reported for almost a century.

It is a very strong animal, belonging to the Urside family, has a body up to 2.5 m long, a height at the withers up to 1.5 m and a maximum weight of 600 kg. The brown bear (ursus arctos) can live up to 30 years in the wild and up to 50 years in captivity. The brown bear has a thick, much appreciated fur. Although the base color is brown-brown, the variations are particularly large, from reddish bears to almost black ones.

Some specimens have white spots at the base of the neck, sometimes forming a true collar, similar to that of a Himalayan collared bear. More than 6,000 specimens live in Romania, ie half of the entire bear population in Europe. Every year, in our country there are 5-6 attacks of bears on people, registering at least one fatal case every year.

The recommendation of the specialists is to make noise at the meeting with the bear, the legend according to which the animal does not attack the one who makes the dead being as false as possible. In fact, bears are necrophagous, so someone who pretends to be dead is more likely to be devoured than someone who makes noise.

The Carpathian scorpion is a venomous species from Romania and is, as its name suggests, an endemic species, being widespread only in our country. Scorpio is a terrestrial arthropod of the arachnid class (thus related to spiders). The scorpion feeds on various invertebrates and is more active at night, during the day sitting in dug galleries or under rocks, logs.

It can be found mainly in the southwest of the country (Banat and Oltenia), a small population being found in Buzau County. Its venom is not dangerous to humans, but if the person pricked by the needle is allergic to the venom, the consequences can be dangerous.

Read:  Sebastian Stan, in a new film: what a unique role the actor plays in "Fresh"

A species of tarantula also lives in Romania. It is a species of spider in the wolf spider family. It is the largest species of spider on the territory of Romania and the Republic of Moldova. The female measures on average 25 mm and reaches up to 35 mm, while the male is on average 19 mm, reaching a maximum of 25 mm. It is a terrestrial species, spending most of its time in galleries dug into the ground.

The species prefers plain areas, floodplains, with moist soil in which it can easily dig, are capable of migration and are good swimmers, often crossing large rivers. It has been found that Lycosa singoriensis can swim 7 days non-stop.

Experts believe that the black widow is the spider with the most toxic venom in the world, but fatalities are rare only because the insect is quite small, so with less developed chelicerae and a small amount of venom. It has become legendary especially for the female (which is much larger than the male) habit of devouring her mate after mating.

The spider is pitch black, with red spots on its abdomen. It lives in a rather irregular (vaguely funnel-shaped) canvas, under rocks, among weeds or in the hollows of the ground. It can be found (it is true, quite rarely) in Romania, especially in the Danube Delta, the Coast and in the southern areas (near the Danube).

In Romania live several varieties of vipers: common viper, horned viper (but also at least three subspecies of steppe viper). The most widespread is the common viper (or cross viper), of which, on the territory of Romania, live about 30,000 specimens, followed by the steppe viper and, finally, the horned viper. The latter is the most dangerous, but also the rarest.

Viper berus is 50–70 cm long, in exceptional cases it can reach a length of 90 cm. The color of vipers of this species is varied, from a gray-silver color to yellow, reddish, gray-brown to black (found in viper caves in the Alps). Vipers with darker shades are found in colder regions.

The toxicity of the venom is relatively low compared to other viper species. Local symptoms include severe and immediate pain, followed by a few minutes of swelling and a tingling sensation. The pain spreads throughout the body in a few hours. Necrosis is very rare. Dangerous is anaphylactic shock that can occur within 5 minutes after the bite.

Mercedes is preparing the electric G-Class for launch: when it will be launched, what’s new