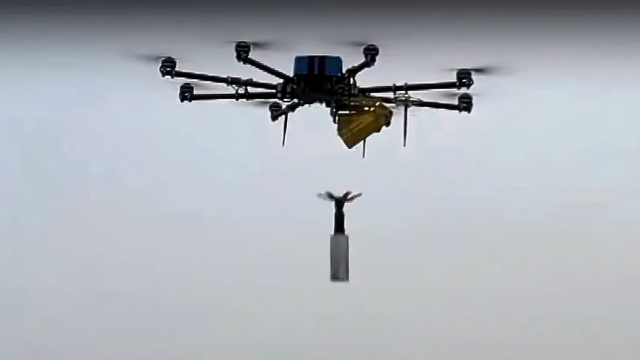 The unmanned aerial vehicle drops a bomb on an RLK-MC-A (ROSC-1) “Valdai” system, which is supposed to help Russian troops detect and destroy enemy drones.

The system is not attacked by a Bayraktar or Switchblade 600 military drone, but by a civilian model modified for military operations. The incident suggests either that Valdai cannot intercept small drones like those produced by DJI, or that it is malfunctioning.

The anti-drone system was developed by the Lianozovo Electromechanical factory. Work on the project began in 2016, and the system entered Russian military service in 2021. We are dealing, at least on paper, with state-of-the-art technology.

Valdai should be able to distinguish between small drones and birds or other flying objects, a difficult task for conventional radars.

Military experts say the incident of such a system being taken out by a modified civilian drone is “embarrassing”.

In the summer, Ukraine launched the “Drone Army” program, which uses civilian models donated by foreign allies, individuals and organizations to fight Russian invaders. The aerial vehicles are used for surveillance, transport and ground attack missions.

Many of the “high-end” weapons Russia has promoted in recent years have performed poorly in the war in Ukraine. Examples are Su-35 aircraft, S-400 anti-aircraft systems or Tigr armoured vehicles.