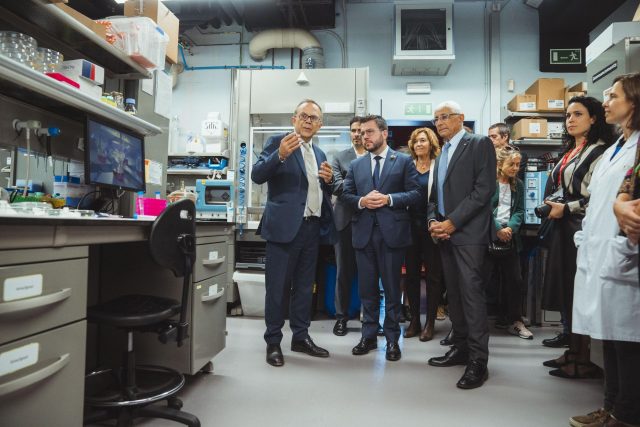 The Generalitat de Catalunya will boost the advanced therapies sector with the creation of the new Centre de Teràpies Avançades de Catalunya. The Government seeks to ensure that all the advances produced in laboratories and research centers can be converted into treatments that improve diseases. and, therefore, the quality of life of the population.

Advanced therapies are treatments based on genes, tissues and cells aimed at tissue regeneration, treatment of inflammatory and autoimmune diseases, cancer treatment or in the application in all pathologies that do not have effective strategies. So far, these therapies have made it possible to cure people with leukemia or restore vision. to people suffering from a disease that caused blindness.

The new center will be the key infrastructure of the advanced therapies hub and will make use of the existing spaces and capacities of the Banc de Sang i Teixits. The Generalitat is expected to invest 60 million euros in it over the next three years, at a rate of 20 million euros per year, earmarked for care resources and research grants.

The hub will consist of the main actors of the R+i system doing research in advanced therapies. and by the Centre de Teràpies Avançades de Catalunya itself, which will be in charge of validation and pre-industrial scale-ups, ensuring the connection between research, further development and commercialization.

Read:  This is how the 'super rats' that save lives are trained

The following will also be part of the hub companies specializing in advanced therapies that are part of the industrial fabric of Catalonia and the health system itself, which will guarantee the necessary translation and clinical validation, as well as the adoption and implementation of these technologies.

Biocat will institutionally coordinate the ‘hub’, as it will identify and align the agents of the BioRegion, and from where it will work to guarantee the entire value chainfrom its generation and development to its access to the market and the health system. It will also ensure the return and access of these therapies to the public system under appropriate conditions and prices. The president of the Generalitat, Pere Aragonès, is convinced that this “hub “will be a pioneer in Europe and will reinforce the positioning of Catalonia as a pole of reference in biomedicine&rdquor;.

For his part, the ‘conseller’ of Health, Manel Balcells, has highlighted that. the connection between public research and the industrial fabric. will allow “to increase the social and economic impact of a growing sector with high added value&rdquor;. The hub and the Centre de Teràpies Avançades de Catalunya project is expected to be presented to the public in February 2023, at which time the operational plan will begin to be implemented.

Read:  How long does it take for covid symptoms to appear?

Catalonia has a scientific level of advanced therapies and bioengineering. very high, comparable to other European countries in terms of scientific production, as well as a first-rate clinical and hospital network, with a high potential for research and the execution of innovative clinical trials. In fact, one of the most recent research successes in this field in Catalonia has been CAR-T, an immunotherapy that the Clínic and Sant Pau hospitals have managed to manufacture to treat multiple myeloma and acute lymphoblastic leukemia. Moreover, Catalonia concentrates 60% of the research in advanced therapies and bioengineering in Spain and has half of the international reference hospitals. There is 50 companies dedicated to the sector (30 start-ups and 20 corporations), with a turnover of more than 3 billion euros and more than 6,000 workplaces.

The ‘conseller’ Balcells has wanted to emphasize that it is about. a “strategic project for the countrythat will generate value for the healthcare system, but also for the globality of the entire ecosystem. We have a pioneering and internationally competitive life sciences and health sector that attracts investment, talent and companies and that we need to stimulate. By coordinating the efforts of all these key agents, we will have a multiplier effect and we will make all the BioRegion’s capabilities and assets count&rdquor;.