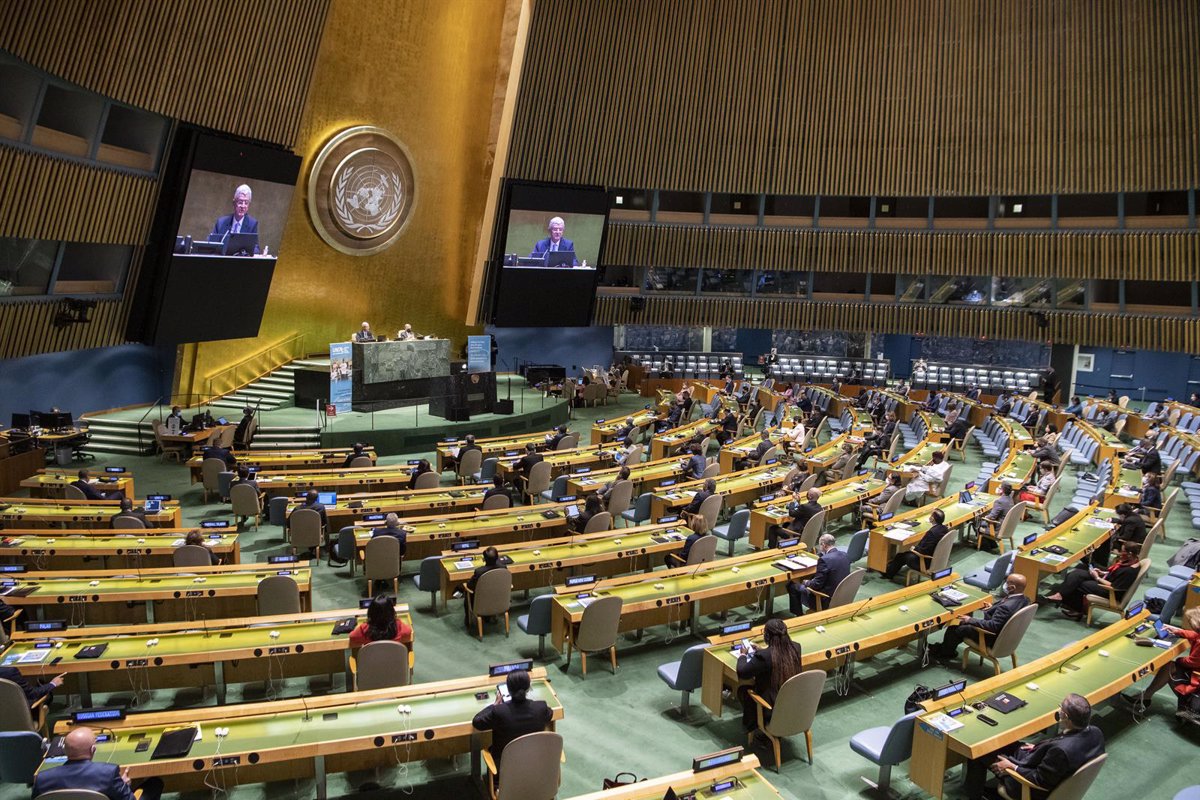 The United Nations General Assembly is holding a special emergency session this Monday, the eleventh of the body in its history, to address the invasion of Ukraine by Russia, a meeting whose conclusions, however, will not be binding.

The decision to hold this session was taken on Sunday by the UN Security Council, where Russia had previously used its veto power to block a statement condemning its offensive. In this case, the vote went ahead after being held in a model in which countries with the right to veto cannot apply it.

Thus, the vote prospered with eleven votes in favor, three abstentions -China, the United Arab Emirates (UAE) and China- and one vote against, that of Russia, which has defended its invasion at all times and has argued that it has It was a measure that has been “forced” due to the war in the Donbas region and the position of Kiev and NATO.

To date, only ten sessions of this type have been held in the UN General Assembly, with the last one in 1982, after a meeting of this type was convened due to the crisis in the Golan Heights, occupied militarily by Israel, a movement not recognized by the international community that continues to this day.

These types of meetings are convened as a result of resolution 377A(V), approved in 1950 and known as ‘United for Peace’, which gives the UN General Assembly the authority to take on matters of international peace and security when the The Security Council is unable to act due to the lack of unanimity among the five veto countries — China, the United States, France, the United Kingdom and Russia.

In this way, the participating countries are expected to make statements during the session, after which a resolution similar to the one presented on Friday before the UN Security Council and vetoed by Russia will be voted on.

Russia’s permanent representative to the UN, Vasili Nebenzia, stated after the vote that Moscow had voted against so that those responsible for the document would be aware that the UN Security Council had not been able to maintain peace and security. on an international level.

Likewise, he stressed that the Russian authorities “have not seen an iota of attempt to find a constructive solution” within the body, while denouncing attempts by those responsible for the draft to use their position to promote decisions against other members of the Security Council.

Nebenzia stressed that “now it is necessary to focus on resolving the causes of the crisis” and criticized the fact that the Security Council turned a blind eye to the war in Donbas for eight years, a position criticized by the permanent representative of Ukraine, Sergiy Kislistsia, who he applauded the decision to take the matter to the UN General Assembly.

Kislistsia emphasized that at the moment the most heard are the anti-aircraft alarms due to the Russian offensive and accused Moscow of “manipulating the concept of genocide” to justify a military invasion under the pretext of protecting the population of the self-proclaimed republics. from Donetsk and Lugansk.

Although the result of the vote in the UN General Assembly will not be binding, they are usually considered to carry political weight by showing the position of the international community as a whole.

In this sense, the ‘think tank’ International Crisis Group has indicated that the session “is potentially a key moment for all UN members to condemn Russia’s aggression, call for an immediate cessation of hostilities and reaffirm the territorial integrity of Ukraine”.

The ‘think tank’ has pointed out that “the (UN) General Assembly must send a clear message of support to Ukraine” and has stressed that “African, Asian and Latin American members in particular must make their voices heard” about the conflict.

In this way, he recalled that “non-Western countries predominate in the Assembly, and it is their votes that will make the difference between diplomatic success and failure” of the initiative, in which it seeks to address the violations committed by Russia against the territorial sovereignty of Ukraine and the norm of prohibiting force from prevailing in international relations.

In any case, the fact that the vote is not binding reduces part of the impact of the resolution, although it will have greater weight than others adopted by the usual route in the body and could lead to the UN Secretary General, António Guterres, to offer agency support for a ceasefire, including the appointment of a special representative.

It could also include a recommendation to member countries to impose sanctions against Russia, something that many Western countries have already done. However, many countries of the Non-Aligned Movement have so far been skeptical of this path,

On the other hand, it could lead to the creation of an investigation commission on possible violations of international law and war crimes that would serve as a deterrent, according to the ‘think tank’, which has recalled that it could also lead the president of the General Assembly to appoint an envoy as representative in humanitarian matters.

The vote could also include a call to Russia to lower its nuclear alert level and to request a safe evacuation of foreigners from Ukraine in the face of hostilities and allegations of discrimination by the Ukrainian authorities in allowing the departure of the country from citizens of African countries.

“None of these actions will end the war by itself. Neither the General Assembly nor the UN system as a whole has the capacity to impose peace on Russia, but the Assembly can, with words and resolutions, make it clear that The majority of UN members reject what Moscow has done and support peace efforts, showing themselves ready to help the victims of this tragic, unnecessary and dangerous war,” the International Crisis Group said.