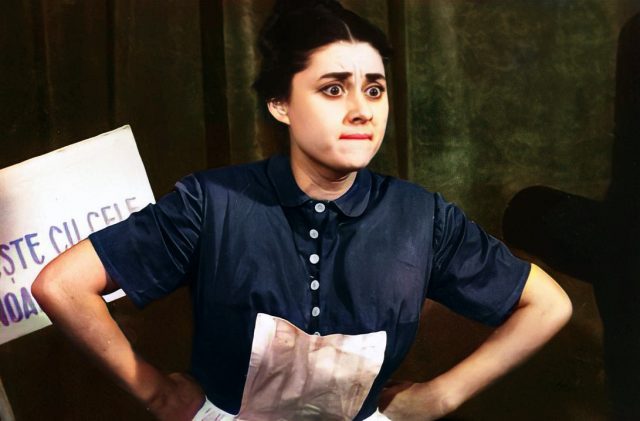 Tamara Buciuceanu-Botez was, without a doubt, one of the most beloved actresses in our country of all times.

Tamara Buciuceanu-Botez knew how to metamorphose in the roles she played like no other. Comedies, dramas, teacher’s roles, absolutely everything she played was impeccable.

Clearly, the actress succeeded in bringing a little bit of happiness to the souls of Romanians who had to face the hardships caused by communism.

About her, as about many other Romanian actors of that period, it can be said that she was an oasis of peace in an ocean of chaos and emotional, political and social instability.

Tamara Buciuceanu-Botez was destined to become an actress: The family DNA was generous to both her and the mother of “Ionică” from “Liceenii”

Tamara Buciuceanu-Botez was, as mentioned before, one of the greatest Romanian theatre and film actresses. She was loved by many and known by all.

“When I was born at night, the doctor told my mother: “Madam, there’s a light outside… like daytime… this little girl is going to be lucky… she’s going to have a star!”, the actress recounted in the biography “Tamara Buciuceanu. A life dedicated to the stage”, written by Bogdana Darie. She and her four siblings – Iulia, Nicolae, Elisabeta and Constantin – led a good life in Tighina, where she was born, now in the Republic of Moldova. They had a large, aristocratic house in the centre of the town, and my mother “laid out the finest silverware, crystal and china every day”, Tamara Buciuceanu-Botez once confessed.

She came from a select family of intellectuals, both her grandparents being priests, since her parents would also prove to have a special love for art.

Clearly, the genetic inheritance was to have its say on Tamara, but also on her sister, Iulia Buciuceanu, who was to become one of Romania’s most appreciated sopranos.

You may not know it, but the actor Mihai Constantin, best known for his role as Ionică in Liceenii, is the son of Iulia Buciuceanu and grandson of “Mrs Isoscel”. Even so, it seems that the stern maths teacher didn’t spare “Ionică” at all, despite their real-life kinship. Not in the film, anyway.

“Tamara Buciuceanu is a special little animal. There is no other Tamara in the world that I know of. Tamara is of a temperament beyond physical possibilities, outgoing, as they say, and so strong that it takes your eyes away. Because she also has talent and a certain expressiveness, this temperament becomes fresco. Tamara is not our normal. She is like milk on fire, she comes out of the pot”, said the actor Marin Moraru in his book “We are what our memories are”.

He acted in more than 25 films, his emblematic role being, as mentioned earlier, that of the prefect Isoscel in “Liceenii”.

She was also a constant presence in the theatre, having, over the years, played important roles in plays such as “Coana Chirița”, “Romeo and Juliet at the beginning of November”, “Chairs”, “Cumetrele”, “Doctor Without a License”, “The Nephew”, “Waiting for the Harlequin”, “Miss Nastasia”, “Mamouret”, and many others.

The drama Tamara Buciuceanu-Botez went through

Although we know her mostly from the comedies she starred in, Tamara Buciuceanu-Botez’s life was not always a comedy. In fact, at one point, she who was to become the “great actress” lost everything, along with her family, in their attempt to escape from the ruthless Russians.

It happened in 1940, in June, just after the occupation of Bessarabia and Bukovina by the Soviet Union.

The Buciuceanu family decided in half an hour to flee across the Prut, since otherwise the actress’s father would have risked being killed.

“I immediately ran to the station. My mother took a single suitcase. That’s all! I was losing everything! We arrived at the station and didn’t know what to do with my father. No one was supposed to see him. The Russians would have killed him if they caught him. We all got into a cattle car. We were hiding between animals and sacks filled with stuff.

Dad was helped by the mail wagon attendant. His name was Nephew Vasile and he always remained in our hearts as the man who saved my father’s life. I came up with the idea of hiding him in a mailbag. I made a small hole for him to breathe and he stayed there until we passed Ungheni… If they caught him, they would have killed him”, Tamara Buciuceanu-Botez said, quoted by Adevărul.