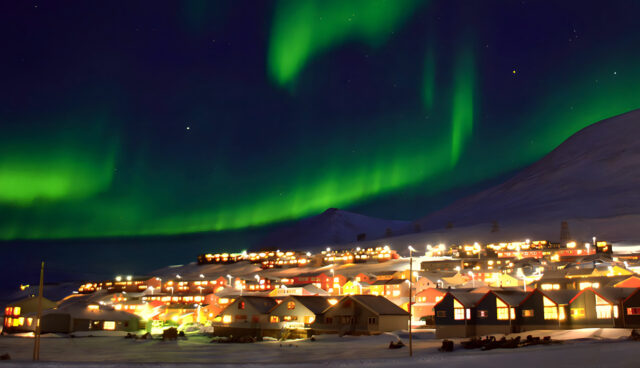 Longyearbyen is the northernmost settlement in the world, with a population of about a thousand and the largest inhabited area in the Svalbard archipelago of Norway. The world’s northernmost town has the largest bunker on Earth, the famous ‘Apocalypse’ shelter.

Longyearbyen is the most populous town on Svalbard. It is located on a remote, frozen archipelago in the Arctic Ocean, halfway between Norway and the North Pole, and is considered “the north of the world”. The sun doesn’t rise here from late October to January. Temperatures have reached record lows of -47 degrees Celsius.

The town stretches along the left bank of the Longyear Valley and along Adventfjorden, the short estuary leading into Isfjorden, on the west coast of Spitsbergen, the island’s widest entrance. Since 2002, Longyearbyen Community Council has become an official Norwegian municipality.

Known as the town of Longyear until 1926, the town was founded and named after American John Munro Longyear, whose Arctic Coal company began mining coal there in 1906. Norske Spitsbergen Kulkompani (SNSK) took over mining operations in 1916 and still runs mining in the area.

In the town of Longyearbyen it is “forbidden” to die

The German navy under the Nazi regime almost completely destroyed the town on 8 September 1943, but reconstruction took place after World War II. Historically, most mining operations moved to Sveagruva in the 1990s, and production ceased in 2017 due to the huge financial losses suffered by SNSK since 2014 due to market conditions. In the meantime, the town has seen a big growth in tourism and research. This includes the arrival of institutions such as the Svalbard University Centre, Svalbard Global Seed Vault and Svalbard Satellite Station. Svalbard Airport, Svalbard Church and the Svalbardbutikken general store serve the community.

The special thing about this town is that for over 70 years there has been a ban on burials in Longearbyen due to low temperatures and permafrost. Longearbyen’s ground ice simply does not melt, even in summer, preventing bodies from decomposing. Between 1917 and 1920 the country was hit by a terrible epidemic, and 13 years later, the authorities realised that the victims were still intact. Fearing a new wave of pandemic, they decided to close the cemetery, banning further burials. The crosses are still in the cemetery as memorials.

The small town of Longyearbyen has no homes for the elderly, and in the event of a serious illness, the authorities have to transfer the patient to the nearest hospital, which is two hours away. Even childbirth is practically impossible in this town. Pregnant women are forced to move to the mainland three weeks before giving birth. The small hospital on the island is not equipped and operates only in extreme emergencies. You can also work until old age in Longearbyen, but as soon as you’re ready to retire, you have to return to the mainland.

Read:  Honda is preparing its first electric SUV: when it launches

A seed repository was built here in 2008 (26 February 2008) which will store, when at full capacity, the seeds of about one hundred million plant species from around the world. The repository currently holds the seeds of about half a million species. The Svalbard International Seed Vault (SISV), also known as the ‘vault to the end of the world’, is designed to hold a sample of every plant variety known to man.

Longyearbyen was chosen to house this repository because of its seismic stability and because, being dug into the permanently frozen soil of the Arctic, it makes preservation easier. The seeds are wrapped in aluminium foil, surrounded by one-metre-thick walls. The vault has a 125-metre-long tunnel carved into the rock. Even if refrigeration systems fail, experts say, the mountain’s temperature will be below freezing because of permafrost, the region’s eternal ice cover.