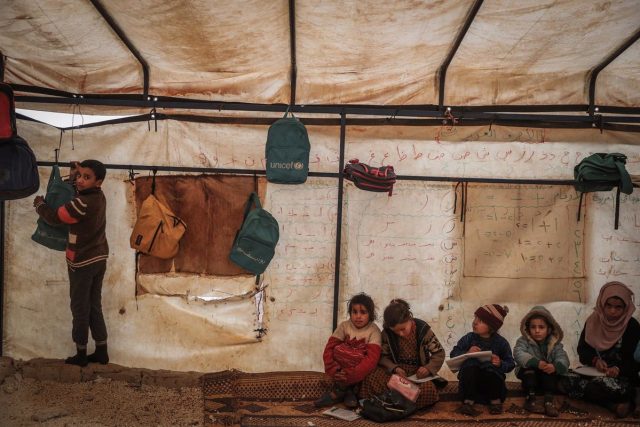 The United Nations Children’s Fund (UNICEF) has warned that Syria has become in recent years one of the “most dangerous” countries in the world to be a child, and that it has an entire generation that is “fighting for survive”.

This was reported by the Executive Director of UNICEF, Catherine Russell, at the sixth Brussels Conference on Syria, where, in her speech, she listed the main challenges facing the Syrian population and, specifically, the younger sector of the citizenship of that country.

One of the main challenges to which they are exposed, according to Russell, is food shortages, since almost a third of Syrian minors suffer from chronic malnutrition, a situation aggravated by the conflict in Ukraine.

In a country where “almost 90 percent live in poverty”, more than 6.5 million children are in need of urgent assistance, a figure that has been increasing and is already at its highest since the start of the war in Syria, in March 2011.

“Eleven years of conflict and sanctions have had a devastating impact on Syria’s economy, setting development back 25 years. Most of the basic systems and services that children depend on have been cut to the bone,” Russell said.

On the other hand, going back to the framework of the Syrian war, UNICEF has denounced that in the last eleven years nearly 600 medical facilities have been destroyed, including mother and child hospitals. At the same time, around 13,000 children have died, although the real numbers may be “much higher”.

To the physical wounds we must also add the psychological consequences that the conflict leaves on minors. Throughout 2021, a third of Syrian children showed signs of psychological distress, “invisible wounds that can last a lifetime”, as Russell laments.

But the children who have managed to flee the conflict have not had better luck, because according to Russell, many of them “have also experienced trauma.” More than 2.8 million Syrian children now live in countries in the area and have seen their lives plagued by “loss, risk and uncertainty”.

However, one of the points to highlight in the context of the war in Syria is access to education, because, “against all odds”, almost 4.5 million Syrian minors have access to learning opportunities, something that, according to Russell, it is “thanks to generous donor funding”.

“I would like to take a moment to acknowledge and commend the generosity and commitment that neighboring countries, their governments and their people continue to show. Many of these countries face their own challenges. Taking in so many children and their families is an added strain, which makes their generosity even more remarkable. We know that other crises affecting children dominate the headlines. But the world must not forget the children of Syria,” Russell said from Brussels.

Finally, the executive director of UNICEF has stressed the need to put an end to the war in Syria, leaving aside “military solutions”, and has demanded an end to the violations of the rights of Syrian children, including the murder and injuries.

“Until a sustainable solution is reached, UNICEF and our partners will continue to do everything possible to reach all children, wherever they are,” said Russell, who pointed out that, today, the agency needs about 295 million euros to respond to the humanitarian emergency in Syria.