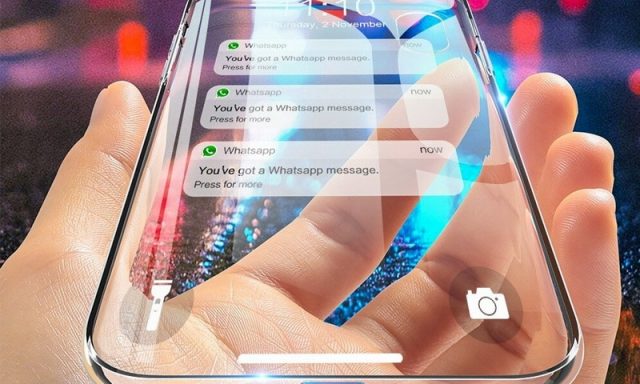 The transparent smartphone concept, described in a recent patent granted to Samsung, is based on a variation of OLED screen technology that allows for the display of visible front-to-back images.

The innovation is not exactly new, having already been used by LG to develop a new range of transparent screen TVs. In Samsung’s interpretation, the OLED screen will be able to render colour images on a surface that can take on a transparent or mirror-like appearance, depending on how it is viewed.

Characterised by low power consumption, high brightness and clarity with a very low response time, OLED technology’s main advantage over LCD is that it does not require a separate light source, each pixel being its own light source. Thus, OLED displays can be as thin as plastic foil, easily moulded or folded to the shape of the casing.

Read:  Google will add native support for AirTag and other abusive bluetooth trackers

According to Samsung’s new patent, the transparent screen will be able to blend in seamlessly with the back of the phone, becoming completely invisible when not activated. In fact, it could even be the foldable screen visible on the inside, switched into a mode of operation that eliminates the need for a dedicated secondary screen. In addition to substantial cost savings, the technology would allow for slimmer foldable phones, or at least reallocate the space freed up to accommodate a larger battery.

Like the dedicated always-on screens included on some phones for displaying notification messages, the new transparent screen will be able to play visible information with the phone folded or unfolded, while consuming very little power.

Read:  All Wi-Fi passwords used are saved on the PC. Where to find them

Another major advantage will be the possibility of using the same physical screen for selfie pictures with the camera on the back of the phone, with the front camera remaining rather utilitarian (e.g. for video calls where image quality is not a priority).

Unfortunately, the publication of a new Samsung patent does not automatically imply an imminent product launch. Most likely, the innovation is only “reserved” for the South Korean company, in the sense of blocking the launch of a product with these features by rival manufacturers.