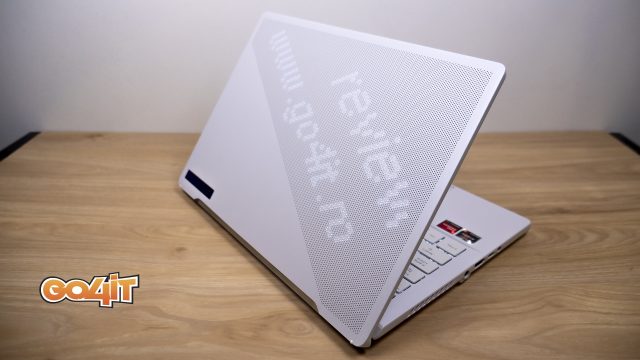 “It’s hard to find a good mix,” said an ad a few years ago, but ASUS seems to have found the magic formula for combining a high-performance gaming computer with a productivity laptop. ROG Zephyrus G14 takes the best of each category and manages, as much as possible, to avoid most of the disadvantages. This mix is ​​achieved through a smart design and the latest top components from AMD. The Zephyrus G14 could be the perfect model for those looking for a high-performance, good-looking computer that is very easy to carry.

Zephyrus G14 does not fundamentally change the design, but adds a missing component

ASUS has been offering Zephyrus G14 laptops on the market for several years now, and the design hasn’t changed fundamentally in the meantime. It also comes in a black version, but the white model is the one that definitely stands out. That’s because most gaming laptops don’t come in light colors. We still have that characteristic ErgoLift design, ASUS, which tilts the bottom of the computer when you lift the screen. It offers two advantages: it provides access to more cold air from the bottom, but it also offers a more comfortable position in use. Also to help cool the components, ASUS cut out the plastic cover to attach a metal plate, which can help dissipate the heat produced by the internal components. The external dimensions of the laptop are dictated by the 14 ”screen, with very thin edges. Even though in recent years ASUS has claimed that these laptops do not need a webcam, it seems that the reality of recent years has led to the return of this component. This is located in the space above the screen, next to an infrared sensor for facial authentication via Windows Hello. The camera is not exactly top notch, but it does its job for video conferencing.

Despite its small size, there is plenty of room for a large 76Wh battery, as well as a full set of connectivity ports: two USB-A, two USB-C, one HDMI, headphone jack, and a slot for microSD cards. The only port missing is a wired internet Ethernet, but WiFi 6E should be pretty good in its absence, with speeds of over 2 Gbps.

ASUS also continues to offer a white LED array called AniMe Matrix on the cover of the new model, on which various animations or information about the system can be displayed. However, this is optional, with or without configurations available. To reduce battery consumption, it can be turned off anyway. This design trick is what in English would be called a “gimmick”, meaning something that will attract your attention, but which does not necessarily have a real utility. If I had to choose, I would choose the model without AniMe Matrix, especially since the lack of this system reduces the weight of the computer by about 70 grams.

When it comes to the keyboard and trackpad, ASUS seems to have made a very good combination between a touch-response keyboard and a fairly long keystroke, which ensures accuracy in games, but also when typing. Perhaps those who write more than play would have preferred a smaller race to encourage speed. The trackpad, on the other hand, is one of the best on a Windows laptop, offering a large glass surface that is pleasant to the touch. It will be especially appreciated by those who will be working on this laptop on the go without a mouse. The only downside to this laptop seems to be the power supply. It is in the classic format, with a round plug and is quite large and heavy. Unfortunately, there are still no USB-C power supplies that provide enough power for a gaming laptop, even an ultra-portable one. Maybe the next generation will adopt a USB-C charger with over 200W power, as this standard now allows.

Inside, this Zephyrus G14 configuration integrates only high-end components capable of running the latest video games. The system is based on the most powerful AMD processor for slim laptops: Ryzen 9 6900HS, a model with 8 cores, 16 threads. It reaches frequencies up to 4.9 GHz in boost and even integrates a Radeon 680M GPU, useful for conserving power in use for non-gaming tasks. The Ryzen 6000 series is also the first to use Zen3 + cores, compatible with DDR5 memory, something that is not yet I have not seen the company’s desktop processors. Another premiere is the Radeon RX 6800S, AMD’s newest high-end GPU dedicated to low-power systems. With a standard power consumption of 80W, which can be dynamically expanded up to 105W via SmartShift technology, and with 8 GB of memory, the Radeon RX 6800S is recommended to run games in Full HD or QHD resolutions in high detail. Of course, being an AMD 6000 series GPU, it is based on the RDNA2 architecture, so it is compatible with new AMD technologies such as FidelityFX Super Resolution, for upscaling in games, and with DirectX Ray Tracing in titles that benefit from such graphics effects. .

And ASUS has configured the laptop in such a way that the rest of the components can keep up with the processor and graphics chip. we are dealing with 32 GB DDR5 memory at 4,800 MHz, a 1TB M.2 SSD at PCI-Express 3.0 speeds. The 14 ”screen offers 16:10 QHD resolution, thus being suitable for productivity due to the increased vertical space, but it also comes with a refresh rate of 120 Hz, which will ensure a smooth gaming experience. And, in addition to all this, the laptop also integrates a Mux Switch, which can connect the dedicated GPU to the laptop screen directly, without going through the GPU integrated in the processor. As a result, in some games, performance can be significantly improved. ASUS has promised that by 2022, all of its gaming laptops in the ROG range will benefit from assisted liquid metal cooling for the processor, as well as ROG Nebula-certified monitors, which ensures that the screens are well calibrated at the factory, with Pantone certification. , supports HDR technologies, including Dolby Vision, and has a variable refresh rate. All these advantages can be found on the Zephyrus G14. The truth is that for a 14 “display, the QHD resolution sometimes seems to be too high, close to the concept of” Retina “from Apple, where you can no longer distinguish pixels from a normal distance. The brightness of the panel is quite good, while the anti-reflective protection will certainly be appreciated by gamers. This means that it does not include a touchscreen, something that many are starting to want, especially on productivity laptops.

Zephyrus G14 is a powerful and quiet computer

I was pleasantly surprised that the laptop is not noisy at all, not even when used on the Turbo profile. It seems that the cooling solution chosen by ASUS for such a thin laptop can withstand the temperatures of these high-performance components without much effort. Of course, when the computer is running more complex tests, games, or tasks, such as rendering a video clip, coolers start to sound, but never at an annoying level. However, the compact design speaks for itself when it comes to temperatures. The processor can reach 95 degrees, the upper limit set by AMD for the Ryzen 9 6900HS. The frequencies are around 4 GHz even at these temperatures, above the standard 3.3 GHz, but significantly lower than the boost of a few seconds at 4.9 GHz. However, the graphics chip remains fairly stable between 75 and 80 degrees in the most complex tests, which suggests that we get the full performance of the Radeon RX 6800S, without throttling.

Read:  New findings from Ukraine show what a paper tiger Putin's army is

I was also pleasantly surprised by the speakers of this laptop, which offers a decent sound, far from being a reference model in the market, but which offers a strong sound and quite well defined compared to other gaming models on the market. It should be noted that the low frequencies are very well reproduced. On the other hand, the autonomy is only good, not great, with 3-4 real hours of intense use on an economic profile, but this is to be expected, given the high-performance components that the internal battery has to power. You can get better performance for simpler tasks, such as video playback. Performance is unexpectedly good for such a lightweight laptop

But enough about productivity and design. Let’s talk about gaming performance. I tested Zephyrus G14 with some of the most demanding games in recent years, in great detail, even running tests with Ray Tracing, but also with FidelityFX Super Resolution, where these options are available. The results are very good for this laptop, especially because we are talking about a thin & light model. This means that lowering the details on High will provide a significant contribution of performance in most titles, especially for those who want to play in high resolutions with high framerate, where the 120 Hz QHD screen should offer the best experience.

All tests were run in both QHD and Full HD resolution, as on a display of this size, lowering the resolution would not have a major impact on visual quality. For tests with FidelityFX Super Resolution, we chose the “Balanced” option, which offers a good balance between image quality for upscaling and performance. All games exceeded 60 frames per second, and some approached 100 frames per second, while others even exceeded this value. Rainbow Six Siege, for example, went for 400 FPS in Full HD resolution. Even on QHD, the results are very good, for a system that has a total consumption of about 150W, less than an average desktop video card today. The only difficulties I saw were games with non-optimized Ray Tracing for AMD, such as Cyberpunk 2077 or Watch Dogs Legion. Tiles like FarCry 6 and Shadow of the Tomb Raider did much better with ray tracing effects on AMD hardware. However, the Ryzen 9 6900HS processor is a reference model even for productivity activities where multi-thread processing is important, the tests from Cinebench proving that it is one of the best processors on the market at the moment. However, the SSD is only an average one, considering the possible current performances, but for gaming and even video editing, the 3.5 GB / s will definitely be enough.

In conclusion, the ROG Zephyrus G14 is one of the most interesting laptops I’ve seen lately. It features one of the most inspiring designs for a gaming laptop and comes with a very inspired selection of components. I’ve been seeing a lot of “Full AMD” gaming laptops lately, but I hope this model isn’t the last, as I was pleasantly surprised by the results. The only real disadvantage of this model would be the price, which will certainly jump by 10,000 lei when it arrives in specialty stores in Romania. A similar configuration, but with 16 GB of RAM is available on Amazon for 2,100 euros, ie 11,000 lei.