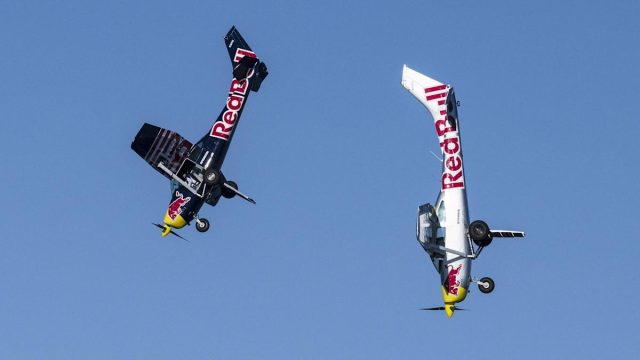 Skydivers Luke Aikins and Andy Farrington will try a performance that no one has dared to do so far, for good reasons: the stunt is extremely dangerous.

The two cousins ​​and aviation professionals will fly a Cessna 182 “experimental aircraft” at an impressive altitude, simultaneously tilting the planes in a vertical descent, and then each will jump into the other’s aircraft. Hulu will broadcast the aeronautical feat live, courtesy of Red Bull TV, on April 24.

Both Aikin and Farrington regularly perform such stunts that are not at all for the faint of heart, as members of the Red Bull Air Force, whose members are some of the best professional skydivers and flyers in the world. winged suits from around the world.

Read:  Ciprian has visited all 197 countries in the world. The country he would stay in after seeing the world

Aikin made history in 2016, becoming the first person to jump from 7,600 meters without a parachute. For this stunt, the specialists designed a human-sized net to mitigate its fall.

Despite being the youngest member of the Red Bull Air Force, the 39-year-old holds parachuting records, BASE jumps, and has many hours of flying activity, surpassing the performance of his colleagues.

The stunt that will endanger the lives of the two paratroopers will be able to be watched live, on Hulu, on April 24, as we mentioned at the beginning of the article.

Read:  The carmaker who turns off the light bulb forever: the explanation for the bad news

This stunt is all the more spectacular as, as far as we know, it will not include additional technical changes to the aircraft of the two. Dr. Paulo Iscold has designed a custom air brake system that allows both aircraft to maintain a controlled vertical descent after the paratroopers change seats. In other words, both planes will, in turn, descend in a controlled manner at approximately the same speed as the paratroopers descend.