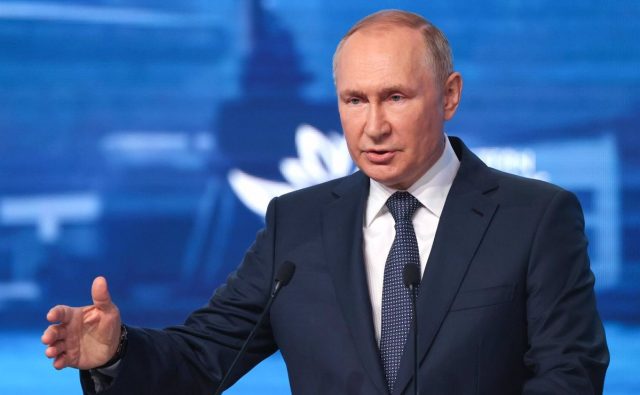 The ceremony of signing the agreements on accession to Russia of the self-proclaimed Donetsk and Lugansk People’s Republics and the Kherson and Zaporiyia regions, occupied by Russian forces as part of the invasion of Ukraine, will take place this Friday, Kremlin spokesman Dmitry Peskov has confirmed.

Peskov has indicated that the signing will take place at 15.00 (local time) and added that Russian President Vladimir Putin will meet with the leaders of the four Ukrainian regions, who have traveled to Moscow in view of these events after the holding during the last days of various referendums, as reported by the Russian news agency TASS.

Thus, he stressed that the president “will give a great speech” during the event and clarified that “it is not a message from the president to the Federal Assembly.” “It is very important not to confuse it. It is a different format. The president’s message will take place later and we will inform at the right time,” he said.

Read:  U.S. officials meet with Taliban for first time since death of al-Qaeda leader in Kabul

In this regard, he has specified that these four territories will be accepted in Russia after “holding referendums and making the corresponding request” to the authorities of the Eurasian country. “The meetings (between Putin and the pro-Russian leaders of these regions) will take place in the margins of this ceremony,” he has specified.

Hours earlier, the secretary of the Central Committee of the Russian Communist Party, Alexander Yushchenko, had unveiled that the deputies had been invited to an event in the Kremlin on the aforementioned date and time, while the Moscow Transport Department warned of traffic blockades in the city center starting at 6 a.m. (local time), the Russian news agency Interfax has reported.

Referendum results released by the Russian Electoral Commission, with counts already completed in most cases, show overwhelming support for Russian membership in the Donetsk, Lugansk, Kherson and Zaporiyia regions, with figures ranging from 96.75 to 98.7 percent in favor of ‘yes’.

Ukrainian authorities and Western governments do not grant any validity to the referendums, while Moscow intends to use them to legitimize its occupation, as it did in 2014 with the Crimean peninsula. The Kremlin had already made it clear that the hypothetical annexation of the four territories, occupied in the framework of the war, would be swift.